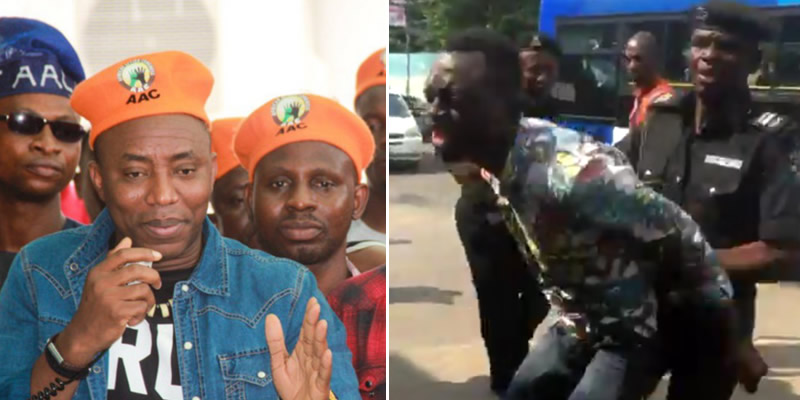 Human rights lawyer, Olukoya Ogungbeje has dragged the federal government before the Federal High Court over the clampdown on ‘Revolution Now’ protesters, who claimed to be demanding better governance in Nigeria.

In a suit filed before Justice Chuka Obiozor of the Ikoyi Division of the Court, Ogungbeje is praying the court “to order the police to release everyone in its detention”.

He argued that protest is a guaranteed right of every Nigeria according to the constitution of the country.

The lawyer joined the Department of State Services (DSS), Inspector-General of Police, and Attorney-General of the Federation in the ex parte suit on the violation of fundamental human rights.

The lawyer told the court he was part of the protest but was barred along with other people in Lagos from carrying out their constitutional right.

He stated that the attacks on him and other protesters were a gross violation of their fundamental human right to peaceful assembly and freedom of expression.

Ogungbeje said, “The right to peaceful protest is a constitutionally guaranteed fundamental right guaranteed under the Constitution of the Federal Republic of Nigeria.

“By engaging in peaceful protest, the applicant and other persons have not committed any offence known to law to warrant the treatment meted out to them by the respondents and their agents.

“The acts and actions of the respondents have infringed on the provisions of the Constitution and the rights of the protesters.”

The case will come up on August 14.

Withinnigeria recalls that the ‘RevolutionNow’ protesters had embarked on a nationwide protest but were dispersed by police and other security agencies with over 50 protesters arrested and detained across the country.

Omoyele Sowore, the convener of the protest and 2019 presidential candidate, was arrested two days before the protest began.

Justice Taiwo Taiwo of a federal high court sitting in Abuja had granted a request of the DSS to detain Sowore for 45 more days.