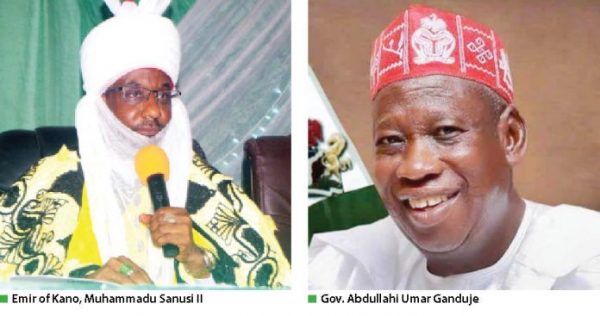 The Emir of Kano, Alhaji Muhammadu Sanusi II, Governor Abdullahi Ganduje of Kano, among others attended the Eid prayer at the Kofar Mata Central Eid ground in Kano on Sunday.‎

Sanusi called on parents to inculcate the fear of God in their children, so that they can be assets to the family and society at large.‎

He also admonished Muslims to always manifest the fear of Allah by fulfilling their promises.

‎The monarch ‎then called on Nigerians to “continue to live in peace with one another so as to foster peace, love and unity in the country”.

Ganduje, in his remarks, enjoined muslims to love and share with the less privileged as exemplified by Prophet Mohammed (SAW).‎

NAN reports that the prayer was also attended by state commissioner of Police, Ahmad Rabiu, members of National and State Assembly and former members, members of the executives council and ‎members of the Emirate Council, among others.‎

Security was tight during the prayer as armed policemen and other security personnel were deployed to various Eid grounds and other strategic places in the city.‎