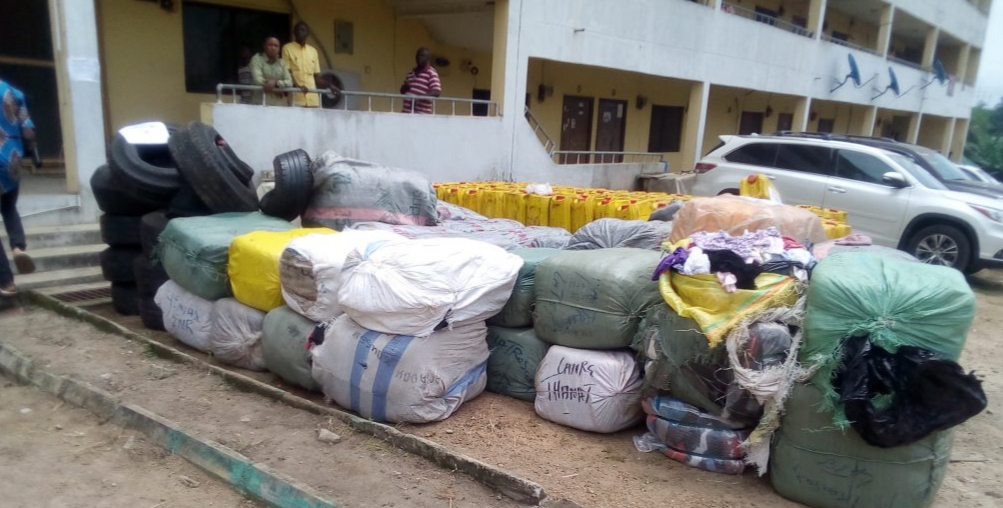 The Nigeria Customs Service (NCS), Oyo/Osun Command, on Wednesday, said that it has arrested no fewer than 35 suspected smugglers in connection with smuggling of some prohibited items into the country between January and July this year.

Customs Area Controller in charge of Oyo and Osun states, Mr. Abdullahi Zulkifli Argungu, who made this disclosure while addressing journalists at the command’s headquarters in Ibadan, the Oyo state capital, added that 6,067 50kg bags of foreign parboiled rice were seized by the command between January and July this year.

Argungu maintained that five out of the 35 suspects arrested have been charged to court, while 30 of the suspects are on administrative bail.

He added that the command seized 93 vehicles, 730 kegs of vegetable oil, 39 bales of second-hand clothing, 966 used tyres, 50 bags of sugar and six bundles of textile material within the period under review.

“It is worthy of note that the command in its efforts to combat smuggling, on the 30th July, 2019 commissioned a Customs outpost at Kishi community in Irepo local government of Oyo state. Kishi community has long been perceived to engage in smuggling with impunity because of their hostility to officers of the Nigeria Customs Service.

The outpost was commissioned in the wake of a courtesy call on the governor of Oyo State, Engineer Seyi Makinde on the 17th July, 2019 where the controller appealed to the governor to prevail on Kishi people to refrain from their perceived activities and eschew the avowed hostility to Nigeria Customs Service so as to save themselves from the long arm of the law.

“We will continue to dialogue, engage and educate the local and business communities on the security and economic implications of smuggling, while carrying out the statutory functions of enforcing compliance with the government fiscal policy.

At this juncture, let me express my appreciation to the governor for admonishing Kishi people on the repercussions of making their community inaccessible to officers of the service through age-old hostility. I also appreciate the resultant effort made by the leadership and people of the community to foster a healthy rapport with officers of the service in the course of discharging the enormous task of suppressing smuggling, facilitating trade and making business environment congenial for men and women in legitimate business.

My message to the general public is, smuggling is an I’ll wind that blows nobody any good. Stay away from it. Do not aid and abet it,” he said.