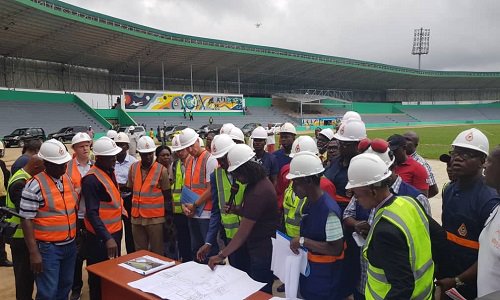 The FIFA inspection team, which arrived in Nigeria on Monday on an inspection tour of facilities for the hosting of the 2020 edition of the FIFA U-20 Women’s World Cup, has expressed satisfaction at the state of facilities in Benin City, the Edo State Capital.

Nigeria is bidding to host the tournament alongside India and South Korea. India, however, is out of contention as they were handed hosting rights to the 2020 edition of the U17 Women’s World Cup. Nigeria last hosted a FIFA tournament ten years ago when it hosted the men’s U17 World Cup.

They were joined on the tour by Nigeria’s bid coordinator, Mallam Mainasara Ilo and officials of the Nigerian Football Federation (NFF) including its President, Amaju Pinnick, Aisha Falode, head of the Women’s Football League, and Ruth David, head of Women’s football at the federation.

The FIFA and NFF officials were conducted round facilities, which included the Samuel Ogbemudia Stadium, practice pitches at Western Boys High School, one of the mini stadia the government is building for the event, and the Protea Hotel, by Edo State Sports Commission Chairman, Godwin Dudu-Orumen and other officials of the Commission.

The FIFA team later paid a courtesy visit to the Governor of Edo State, Mr Godwin Obaseki, who assured them that the state was not only willing to host the matches of the tournament but was more than capable of doing so.

“We are happy to welcome you to our state and we assure you that we are not only willing to host but also that we have what it takes to do so. Here in Edo, we have a tradition of excellence in sports dating back to the creation of this state. This will be on full display if Nigeria gets to host the tournament,” Governor Obaseki said.

The Edo State Governor said the 2020 World Cup will coincide with the 2020 National Sports Festival, which Edo State would be hosting. He said long before the decision by FIFA to inspect facilities in the state, his government had commenced the construction of facilities and the refurbishing of existing ones for the games. He said some of these facilities would be used for the 2020 World Cup. In addition to these, the Governor said some of the best hotels in the country are located in Benin City. He added that with the depth and rich heritage of Edo culture, which is acknowledged all over the world, visitors to the state during the tournament would have a lot to enjoy.