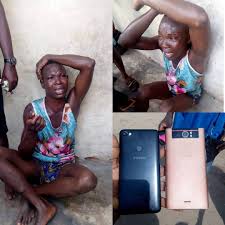 A thief got more than he bargained for after being apprehended for stealing in Delta state.

According to reports, the young man who is reportedly notorious for stealing – entered a house occupied by two ladies in Sapele area and allegedly stole two phones when the ladies went to have their baths.

The suspect was said to have fled immediately after stealing the phones – before an alarm was raised.

He was given a hot pursuit and caught by the residents. He was also beaten mercilessly by the mob and later dragged to the police station.