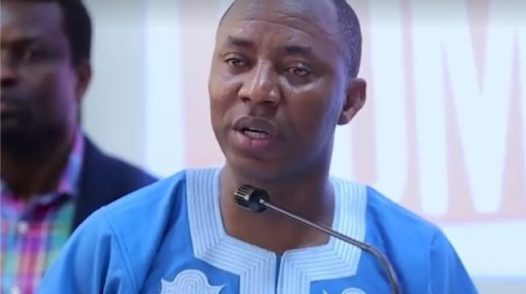 A witness has spoken out, revealing how armed DSS operatives arrested Omoyele Sowore after storming his home at night.

A witness has narrated how operatives of Nigeria’s secret police, the SSS, arrested Omoyele Sowore, a Nigerian newspaper publisher and activist.

Mr Sowore was arrested in Lagos at about 1:30 a.m. Saturday, according to a terse message on his Twitter handle.

The arrest comes barely two days before a planned nationwide protest to demand a revolution in Nigeria, where citizens have long expressed frustration amidst acute insecurity and worsening poverty.

Mr Sowore had teamed up with a network of other pro-democracy activists across the country to spur citizens into a national procession of rage across 21 cities.

The demonstration, tagged #RevolutionNow, had been planned to kick-off on August 5, and Mr Sowore and other organisers vowed they would not back down until a discernible change had been made to Nigeria’s power structure.

The SSS for comments about Mr Sowore’s whereabouts and official allegations against him.

An associate of Mr Sowore who said he witnessed the arrest narrated what transpired on WhatsApp, which was later shared on Twitter by Deji Adeyanju, a political activist based in Abuja.

The identity of the associate was not immediately clear, but the person’s WhatsApp handle is ‘SUG Leader Lagos.’ Mr Adeyanju did not immediately return requests seeking clarification about the witness’ real name.

The witness, who described himself as a driver of Mr Sowore, said it was after 1:00 a.m. that men bearing arms knocked on the door.

“I noticed immediately that these knocks were strange. And didn’t open. I looked and I saw men armed to the teeth. They started forcing their way in like armed robbers,” he said.

He said he immediately recognised the men were from the SSS and was not surprised, “knowing fully well the attention RevolutionNow has garnered.”

He said Mr Sowore tried to open the door at first, “but I immediately told him who they are.” The activist then “retreated and like magic,” the eight armed SSS operatives forced their way in afterwards.

It was when Mr Sowore retreated from the door that he quickly posted a tweet that has a timestamp of 1:25 a.m., the witness said.

The witness said he was also “beaten and handcuffed” by the state agents.

Mr Sowore “was later arrested at the gym in a gestapo manner and dragged after a bit of altercation,” the witness said, adding that the officer leading the team had previously asked that all exits around the building be locked to prevent their target from slipping away.

The witness said after Mr Sowore was arrested, they removed his own handcuff. He then tried to block a Toyota Sienna and Hilux that the security agents brought, with Mr Sowore’s Lexus SUV. But the state agents rammed the vehicle with theirs to violently make way for themselves.

The witness said the officers left in a manner typical of deadly kidnappers.

“I followed them immediately till we got to CMD Road around Ketu when one of them came down from the Sianna and corked his gun, threatening to shoot me. I had to escape at that point,” the witness said.

The CMD Road is the major connecting road leading to the SSS field office in Shangisha, an affluent neighbourhood in Lagos.

The account appeared to be the first hand narration of how Mr Sowore was arrested. The Sahara Reporters‘ publisher joined politics ahead of 2019 elections, and he used his campaign to rail against Mr Buhari.

Following his loss at the poll, he vowed to hold Mr Buhari’s government to account on issues of governance.

Although Mr Sowore was arrested at a time most Nigerians had gone to bed, the development has already sparked outrage on social media, as messages around it filtered across.

Nigerians on social media said the arrest may be a setback for the planned nationwide demonstration, but it would not force its cancellation.

“Congratulations our Revolution just got more popular,” a comment under Mr Sowore’s tweet of his arrest read.

“Expect millions of Sowore in protest. We ain’t stopping,” another comment by a different user, said.