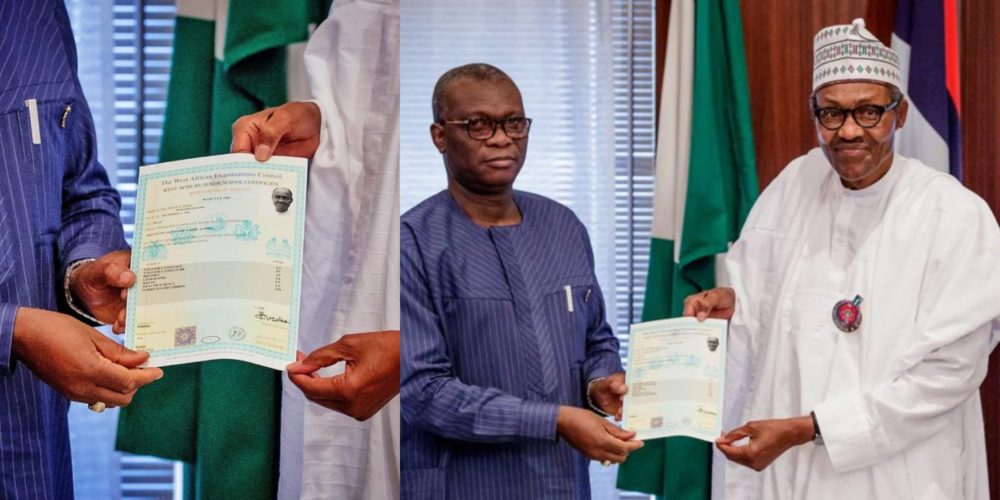 The two documents earlier admitted as Exhibits 19 and 21 were Buhari’s statement of results and the broadsheet for the results of the 18 candidates who sat for the examinations in 1961.

The Deputy Registrar, School Examinations in Nigeria, of WAEC, who appeared before the tribunal on a subpoena, testified before the five-man tribunal led by Justice Mohammed Garba, as Buhari’s fourth defence witness on Wednesday.

He appeared in the petition filed by the Peoples Democratic Party and its presidential candidate, Atiku Abubakar, challenging Buhari’s victory at the February 23, 2019 poll.

Part of the grounds of the petition was that Buhari lacked the educational qualification to contest the election.

When cross-examined by the counsel for the All Progressives Congress, Lateef Fagbemi (SAN), Adewunmi said he, as a WAEC official, certified one of the documents bearing the name of the University of Cambridge Moderated Examination earlier tendered as Exhibit marked R21.

The witness, who said he had been working with WAEC for about 30 years, told the tribunal that the examination was conducted by Cambridge University in conjunction with WAEC.

He confirmed that Buhari sat for eight subjects and had five credits in the examination – Oral English, C5; History, A3; Geography, C6; Hausa, C5; and Health Science, C6.

“He came out with aggregate of 32 and he was awarded Grade 2,” he confirmed.

When asked, he confirmed that “whoever has this (the R21 exhibit) has secondary education”.

Under cross-examination by the petitioners’ lawyer, Livy Uzoukwu (SAN), Adewunmi was asked if Exhibit R19 was a certificate, he said, “I cannot say whether it is a certificate because my signature is not on the certificate. It is not bearing my name or the name of my organisation”.

Asked if the document was issued by WAEC, he said, “It is not a document from the West Africa Examination Council”.

Asked about Exhibit R21, he said, “This is the foundation, the primary foundation for issuance of a certificate.”

The witness was also asked if the document was a certificate.

“This is not a certificate,” the witness answered.

When asked, he also said, “I have never worked with the University of Cambridge”.

In his bid to point out out contradictions in the two documents, the petitioners’ lawyers asked the witness to compare the number of subjects listed against Buhari in them.

The witness confirmed that in R21, “The number of subjects listed against the 2nd respondent (Buhari) is eight”, and in R19 “six subjects”.

He also confirmed that the first name on the two documents was “Mohamed” and as against the President’s “Muhammad”.

READ  Atiku loses his polling unit to Buhari, as Buhari wins his

He disagreed with the petitioners’ lawyer that issuance of an attestation certificate was not limited to cases of loss or misplacement.