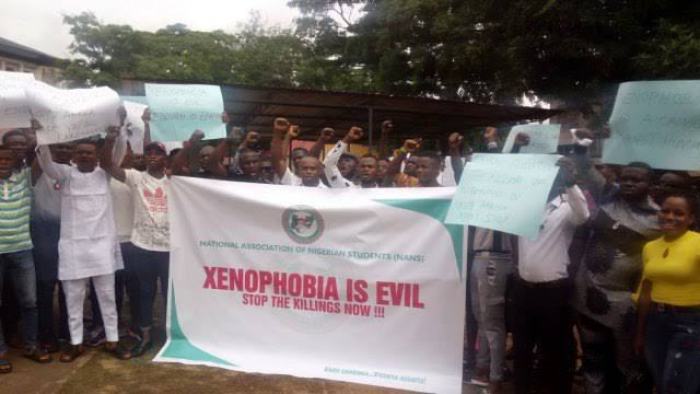 The National Association of Nigerian Students (NANS) shut down offices of MTN and DStv in Benue and Kaduna states on Thursday in protest of the killing of Nigerians in South Africa.

The group had in its previous statement threatened to shut down the South African embassy, DSTV, MTN, and other South Africans businesses in Nigeria.

Philip said the association had to take action having realised that the government of South Africa was “incapable of bringing its citizens to order”.

He said South Africans should not have perpetrated such act on Nigerians, whose country played significant role in their country’s emancipation from domination of the whites.

The student activist called on the South African government to investigate the xenophobic attacks and ensure that justice is served.

He also asked the government to provide data of the victims whose properties were damaged and requested a compensation to such victims.

“Available record has shown that the levels of attacks on Nigerians is on astronomical rise, with the recent killing of Nigerian by South Africans, on July 20 increasing the number to 118 in the last two years,” he said.

“Out of this number, 13 were reportedly killed by South African Police in an extra-Judicial manner.

“It appears that the South African government is incapable of bringing their citizens to order and stop the killings, leaving us with no option than to picket South African businesses in Nigeria until the killing is stopped.

“We, therefore, want the South African government to investigate and provide accurate number of Nigerians so far killed and prosecute perpetrators of xenophobic attacks to ensure justice for the victims.

“We equally want the government to generate data of all Nigerians, whose properties were bunt or looted for immediate compensation.”