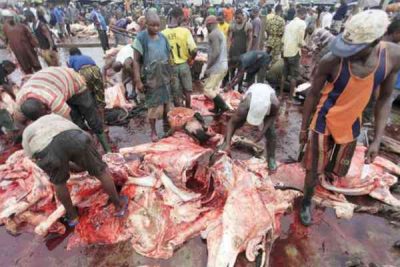 The declaration emanated from a joint stakeholders meeting between the State Ministries of the Environment, Agriculture and operators of abattoirs and slaughter slabs in Lagos State at the Ministry of The Environment conference Room, Alausa.

The Permanent Secretary, Ministry of the Environment, Mr Abiodun Bamgboye who chaired the meeting maintained that the State Government would not condone any act of uncleanliness in meat processing and delivery, adding that attention would be given to all areas of food supply chain with emphasis now on the consumption of wholesome meat by the citizens.

The Permanent Secretary who was represented by the Director of Environmental Services, Mrs Ronke Odeneye warned that all abattoir operators in the State should ensure they undertook their environmental sanitation exercises on Sundays as agreed by the association, adding that waste water and blood generated from meat processing should be adequately discharged in the drains as well as keep the drains free from silt and overgrown weeds.

He stated that the State Government has ensured that butchers in the state now operate in mechanized abattoirs and Slaughter houses where cows are slaughtered neatly and waste water as well as animal waste were discharged properly, so as to avoid pollution in such areas.

He further encouraged the abattoir concessionaires yet to obtain their Environmental Impact Assessment (EIA) and fumigation certificates to do so for their abattoirs from the Ministry of Environment in order to avoid closure of such abattoirs.

Responding, one of the butchers, from Ilaje Abattoir, Bariga, Mr. Kehinde Oseni, thanked the State Government for their support and further pledge the continued adherence of his association to the necessary laws guiding meat production in the state.

The meeting had in attendance stakeholders in the meat processing, Slaughter slabs and abbatoir sector.