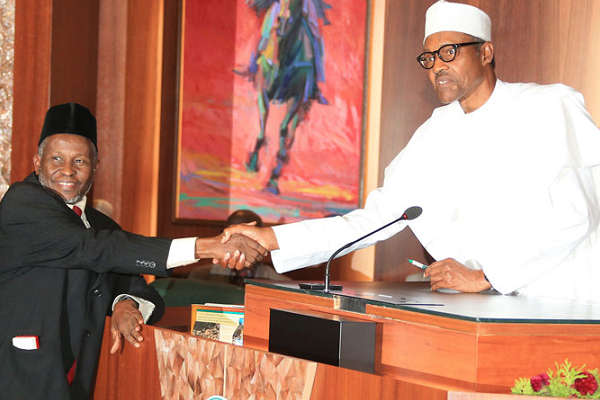 Today’s swearing in of Muhammad followed the voluntary retirement of Onnoghen and his (Muhammed) subsequent confirmation on July 17 by the Red Chamber of the National Assembly as the substantive Chief Justice of Nigeria.

Muhammad, who hails from Doguwa, Giade Local Government of Bauchi State, was born on Dec. 31, 1953.

He obtained his primary education at Giade Primary School from 1961 to 1968 and then proceeded to Government Secondary School, Azare from 1969 to 1973.

He attended Abdullahi Bayero University College, Kano for his IJMB from 1975 to 1976 and later went ahead to read Law at Ahmadu Bello University, Zaria from 1976 to 1980. He attended Nigerian Law School from 1980 to 1981.

Justice Muhammad was elevated to the position of Justice of the Court of Appeal from 1993 to 2006.

He became Justice of the Supreme Court of Nigeria in the year 2006 and was sworn in on Jan. 8, 2007 until his appointment as the Acting CJN by the president in Jan. 25.

The swearing in was witnessed by Vice-President Yemi Osinbajo, Deputy Senate President, Ovie Omo-Agege and Speaker of the House of Representatives, Mr Femi Gbajabiamila.

Others at the event were governors of Bauchi and Ekiti states, Alhaji Bala Muhamme and Dr Kayode Fayemi, some top judicial personnel as well as friends, relatives and associates of the new CJN.