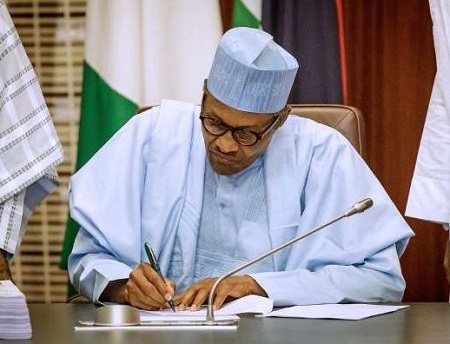 After a long wait, President Muhammadu Buhari finally sent a 43-man ministerial list to the Senate on Tuesday.

The list, which was read by Senate President Ahmed Lawan, has few surprises, some new entrants and old-timers.
Here is a quick look at the profile of the ministerial nominees:

· Ukechuckwu Sampson Ogah: The Abia-born Ogah is an oil magnet and a private investor. He was the 2019 APC gubernatorial candidate.

· Mohammed Musa Bello: The immediate past FCT Minister has been nominated again by Buhari possibly to continue overseeing activities in the ministry. He has a B.SC in management with a major in Banking and Finance from Ahmadu Bello University (ABU) Zaria. He has an MBA in the same field. He represents Adamawa state.

· Godswill Akpabio: The former Governor of Akwa Ibom lost his re-election bid to the Senate. He defected to the All Progressives Congress (APC) months to the last general elections after following out with his godson and successor Udom Emmanuel. His nomination is expected to galvanise the APC in the state and region where he is considered the leader.

· Chris Ngige: Many thought he will be dropped from the incoming cabinet following his long-drawn battles with Nigeria Labour Congress (NLC) and medical doctors. But the former Anambra governor staged a comeback and is likely to be assigned to the Ministry of Labour and Productivity.

· Sharon Ikeazor: The current Executive Secretary, Pension Transitional Arrangement Directorate (PTAD) is a surprise inclusion in the cabinet considering the massive reforms she initiated in the PTAD. Buhari certainly needs better needs of her to have nominated the former Women Leader of the All Progressives Congress (APC) for cabinet role. She is expected to serve as a Minister of State being a first-timer.

· Adamu Adamu: The immediate past Minister of Education from Bauchi state is likely to continue in the same capacity upon constitution of the new cabinet.

· Ambassador Maryam Katagun: The new entrant is expected to serve as a junior minister from Bauchi state despite being Nigeria’s Permanent Delegate to UNESCO. Considering her functions in UNESCO, she is likely to be assigned to the Ministry of Education.

· Timipre Sylva: One of the former governors to make the list, Sylva’s inclusion means he won’t contest the November 2019 governorship election in Bayelsa, which he presided over from 2007-2011. He replaces former Minister of State for Agriculture and Rural Development, Heineken Lokpobiri, who has since picked the nomination form for APC governorship primary.

· George Akume: The former Benue governor, who lost his senatorial re-election bid, is back as a ministerial-nominee. He replaces former Agriculture Minister Audu Ogbeh as the state’s representative.

· Mustapha Baba Shehuri: The immediate past Minister of State for Power Works Housing is back on the list ostensibly to give more impetus to ongoing projects in the ministry.

· Goddy Jedy- Agba: The former Group General Manager (GGM) Crude Oil Marketing Division (OMD) NNPC wanted desperately to govern Cross Rivers but was stopped by powerful forces. He left the Peoples Democratic Party (PDP) to the APC where he has been rewarded with a ministerial slot.

· Ogbonnaya Onu: The immediate past Minister of Science of Technology is back to represent Ebonyi state. He may be asked to continue with the ministry.

· Osagie Ehanire: Another returnee, Ehanire served as Minister of State for Health. He may just be back in the ministry.

· Clement Ike: The accountant was Commissioner for Environment in Oshiomhole’s government for eight years.

· Adeniyi Adebayo: Former Ekiti governor is a top chieftain of the APC. He is back with a public office since he left as governor from 1999-2003.

· Geoffrey Onyeama: The immediate Minister of Foreign Affairs from Enugu is widely believed will continue in the same capacity.

· Ali Isa Pantami: Gombe-born Director General and CEO of the National Information Technology Development Agency (NITDA) in Nigeria is a new inclusion on the cabinet list.

· Suleiman Adamu: The immediate past Minister of Water Resources from Jigawa may continue with the ministry. He was also a former Inspector General of Police.

· Zainab Ahmed: The Kaduna-born accountant is immediate past Minister of Finance.

· Muhammad Mahmood: The current Chairman of the Universal Basic Education Commission (UBEC) is a former member of the Kaduna House of Assembly and Chairman of the Buhari Support Organisation.

· Sabo Nanono: The retired banker has long been tipped for ministerial appointment. He comes to the cabinet with years of experience in banking.

· Major General Bashir Salihi Magashi: A former Sokoto governor (1990-1992), he was retired along with other military chiefs in 1999. He was a legal adviser for the defunct All Nigeria’s People Party (ANPP) and governorship candidate of Democratic People’s Party (DPP) in Kano.

· Hadi Sirika: The immediate past Minister of Aviation is likely to be back in familiar turf.

· Abubakar Malami: The Minister of Justice and Attorney General is an expected returnee being one of the President’s men in the last cabinet.

· Ramatu Tijjan: The National Women Leader of the All Progressives Congress (APC) is widely speculated to head the Ministry of Women Affairs.

· Lai Mohammed: The immediate past Minister of Information and Culture is not a surprise inclusion. He may be back in the same Ministry.

· Gbemisola Saraki: The former Senator led the APC assault that led to the collapse of his elder brother’s political empire in Kwara state. She is tipped to serve as a Minister of State.

· Babatunde Fashola: The immediate past Minister of Power, Works and Housing is expectedly back to continue with projects he initiated in the first term.

· Olorunnibe Mamora: The former Senator and Lagos Speaker is a surprise addition to the list considering he was just appointed Managing Director of the National Inland Waterways Authority (NIWA) in 2018.

· Zubair Dada: Not much is known of the nominee from Niger.

· Olamilekan Adegbite: He is the immediate past Ogun Commissioner for Works and Infrastructure.

· Tayo Alasoadura: The former Senator was a former Secretary to Ondo State Government.

· Rauf Aregbesola: He is the immediate past Osun Governor and trained engineer.

·Sunday Dare: The former editor is Executive Commissioner (Stakeholder Management) of the Nigerian Communications Commission. He is to represent Oyo state.

· Paulen Talen: The former Deputy Governor of Plateau is a chieftain of the APC.

· Rotimi Amaechi: The immediate past Minister of Transportation is an expected inclusion on the list.

· Maigarai Dingyadi: Little is known of the nominee from Sokoto state.

· Abubakar D. Aliyu: He is a former deputy governor of Yobe.