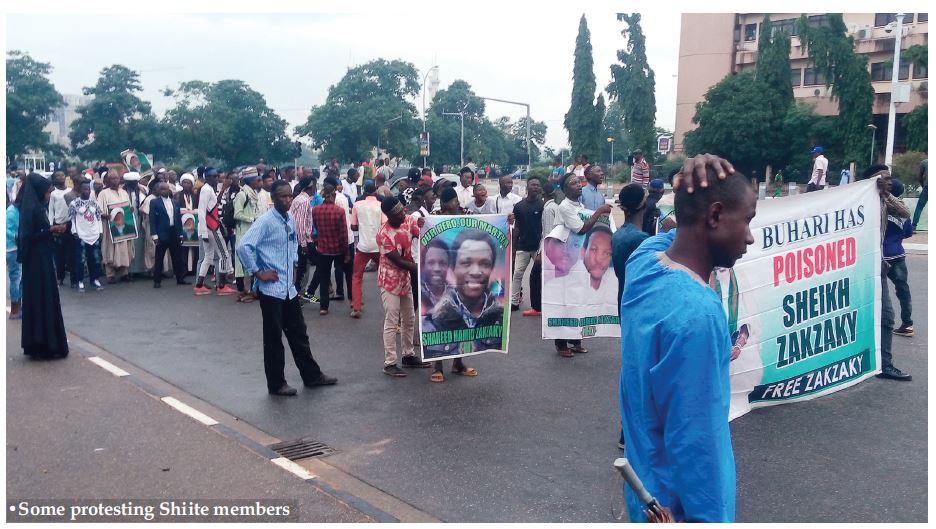 The members of the Islamic Movement in Nigeria have vowed to keep on marching on the streets of Abuja in protest.

According to reporters, the members of Islamic Movement in Nigeria (IMN) have vowed to continue their daily protest on the streets of the federal capital territory (FCT) until Ibrahim Zakzaky, their leader, is freed.

Last week, the police had restricted all protests in Abuja to the Unity Fountain following clashes between the sect and security agencies. But the Shi’ites dared the police to be ready to kill more of their members who will be out on the streets.

Ibrahim Musa, a member of IMN who spoke to journalists in Abuja accused the federal government of refusing to obey the court order which freed Zakzaky and restored his fundamental human rights.

“Why is government hunting somebody that is out to fight for his or her right? You have killed more than a thousand of his (Zakzaky’s) followers and put them in a mass grave. You keep on violating the law of the land and you think nobody should come out and challenge you? That is bad. This shows that the government of is oppressing its citizens. And you do not expect me to cross my legs and allow President Muhammadu Buhari to kill my leader,” he said.

“The protests on the streets of Abuja are as a result of the government’s disregard for the judgment of a court of competent jurisdiction, the Federal High Court Abuja, which freed the revered leader of the movement from an illegal detention described by the government as ‘protective custody’.”

Musa also dismissed the claim by the federal government that it is not involved in the ongoing trial of Zakzaky.

The IMN leader has been in the custody of the Department of State Services (DSS) since December 2015.

Musa said Buhari’s administration cannot be exonerated from the “attacks of the armed forces on members of the group”.

“It is not possible under every logical reasoning to exonerate President Buhari from the genocide perpetrated by the Nigerian Army under his command as the Commander-in-Chief, where over 1,000 unarmed members of the movement, including men, women and children, were killed from December 12 to 14, 2015,” he said.

“The government has declared illegally burying 347 members of the movement in a mass grave at Mando Village in Kaduna after the mass murder, in violation of the Geneva Convention and every known law in the country.

“It is only when government sends its police or Army to attack the peaceful processions that fracas sets in, courtesy of the security agents planted in the movement. We once again dissociate ourselves from any act of brigandage during our protests on the streets.”