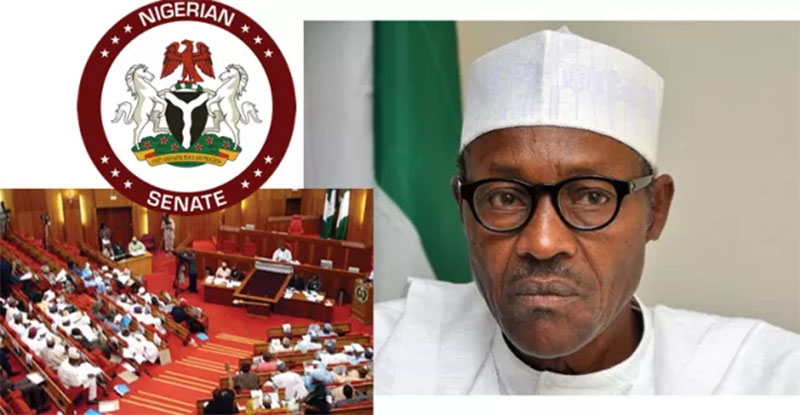 The Senate has given President Muhammadu Buhari till Friday to submit the list of ministerial nominees for screening, failure of which the red chamber will proceed on its two-month annual recess.

In line with its annual calendar, the National Assembly is meant to go on its annual recess on July 26 and resume on September 26.

Buhari, who won election in February and was sworn in on May 29, has continued to delay the submission of the ministerial list, arguing that he will need to take his time to appoint the people he knows.

The Chairman, Senate ad hoc Committee on Media and Public Affairs Affairs, Senator Adedayo Adeyeye, in an exclusive interview on Saturday night, said the red chamber would proceed on its annual two-month recess this week if the Senate did not get the ministerial list by Friday.

He said, “If the list does not come before Friday, the Senate will proceed on its annual recess. We are not giving the president any ultimatum. The schedule of the Senate will go ahead if the Senate does not receive the list. The list is the only thing that can hold us back.”

Adeyeye said the President was at liberty to send the list whenever he pleased and that the Senate also had a duty to consider it in the overriding national interest.

He added, “However, any time they submit the list, we will consider it. It is not our responsibility to put pressure on the President. We can be recalled whenever the list is submitted even if we are already on recess, in the overriding national interest.’’

Corroborating this position, the Minority Leader of the Senate, Enyinnaya Abaribe, told  the Senate would go on its annual recess on schedule.

The Senate would still postpone its annual recess despite the fact that the President had not submitted the ministerial nominees’ list.

Abaribe said, “The Senate will keep to its schedule.”

Findings by revealed that the upper legislative chamber would require at least two weeks to screen the 36 ministerial nominees being expected from the President.

Meanwhile, investigations showed that members of the red chamber were divided over the proposal by the President of the Senate, Ahmad Lawan, that members might have to postpone their recess to treat Buhari’s lists.

Some senators, who spoke with one of our correspondents off the record, said the idea of postponing the recess was not yet a resolution of the House.

Lawan had two Wednesdays ago said that the President could most likely submit the ministerial list for consideration and approval of the red chamber before the end of that week.

He had said that the executive arm of government was working hard to ensure that the list was ready early enough before the senators proceed on their annual two -month recess.

The President of the Senate was then reacting to a point of order raised by Senator Bassey Akpan to the effect that the delay in the submission of the list could affect the holidays of the senators.

But Lawan said his colleagues had expressed readiness to sacrifice their time to screen the nominees when forwarded to the upper legislative chamber.

Lawan said, “This is to inform this Senate that the Executive arm of government is working very hard to get the list of ministerial nominees to the Senate.

“I can imagine that before this (penultimate) week runs out, we could get the list.

“I want to assure you that once we get the list, every senator here has shown and expressed the desire to stay long enough to screen and confirm ministerial nominees in the interest of this country for the country to be taken to the next level.”

Akpan had earlier stressed the need for Lawan to urge President Buhari to forward the ministerial list on time as the National Assembly would soon embark on annual recess.

This, he explained, was to avoid putting lawmakers under undue pressure, especially if the President decided to forward the list on the eve of their recess.

He had said, “We understand the passion of Mr President to consolidate on the gains that he has so far attained.

“If we are going on this long vacation in two weeks (July 26), and by now, we have not received the ministerial nominees, it means we will have to put ourselves under intense pressure.

‘‘It is our collective responsibility that we must support Mr President to succeed.

“I am just bringing to the attention of Mr Senate President that there is a need for you to please urge Mr President to send in the list of ministerial nominees so that the Senate can confirm them immediately.”

Meanwhile, other senators who corroborated the position of Akpan in separate chats with Sunday PUNCH on condition of anonymity, said they were already looking forward to the long vacation.

A senator from the South-East geopolitical zone said, “I have planned to travel and all arrangements have been perfected.

“It is not yet a resolution of the Senate that we should postpone our holiday to screen the nominees.

“I’m not even sure there will be a need for the postponement because the President does not appear to be in a hurry to send the list.’’