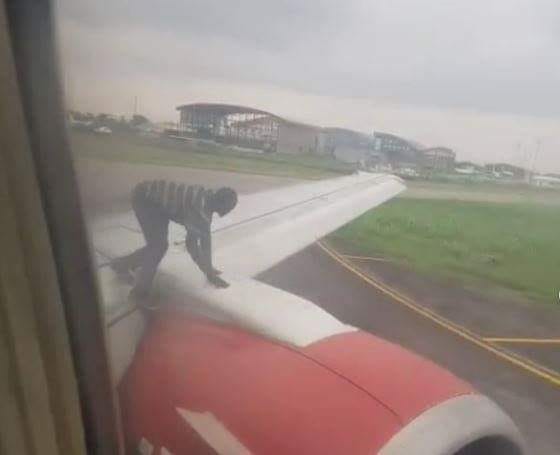 Federal Airports Authority of Nigeria (FAAN) has suspended indefinitely, four aviation security unit heads who were on duty when an unidentified man climbed an Azman aircraft at Lagos airport on Friday morning.

Yakubu said in the interim, one of its General Managers, Dr Anne Enyinnaya-Egbadon, had been detailed to take charge of security at the airport.

Passengers aboard a Port Harcourt-bound Azman Air flight were thrown into panic on Friday when a man climbed the aircraft while it was about to take off at the Murtala Muhammed Airport, Ikeja.

According to a viral video shot by one of the passengers in Lagos, the man illegally gained access to the airside with a hand luggage.

Yakubu said the suspension of the personnel was pending the completion of ongoing investigation into the regrettable security infringement.

She said the personnel that were suspended were on duty when the incident occurred, pending completion of ongoing investigation into the regrettable security infringement.

They have all been replaced, in the interim, she said.

Yakubu said the current arrangement was aimed at ensuring an efficient and thorough investigation towards the recovery and sustenance of the airport’s proactive security integrity.

She added that FAAN viewed the breach as a serious security concern and had commenced investigation to ascertain the remote and immediate causes of that incident to forestall future occurrence.