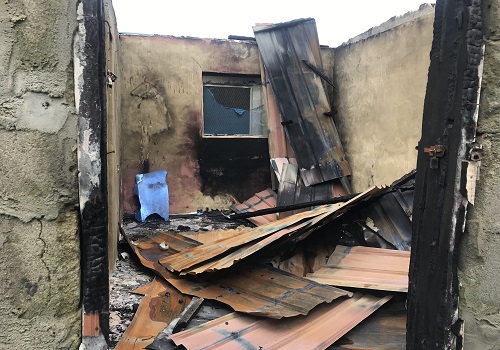 There is palpable tension in Ilaje and Ijebu Isale communities in Ajah areas of Lagos State, following a recent bloody clash between hoodlums which allegedly claimed 15 lives.

Scores of other residents were injured and several houses and churches razed during the clash. Some residents have also deserted their homes following the attacks

The Ilaje community alleged that some people in Ajah (Isale Ijebu) hired hoodlums to attack them over a controversial estate development.

The accusation was denied by Ajah community leaders who in turn alleged that hoodlums from Ilaje unleashed terror on their people and dispossessed them of cash and other valuables.

”We have been here since 1886. This was proved by the tribunal that was set up on the last Ajah crisis,” spokesman for the Ilaje community,the Reverend Oduwole Oluwasegun told The Nation.

“Our forefathers bought this land from them. Many of our people relocated to this area after the demolition of Moba in 1984 and Maroko in 1990. The waterside area was bought from the Aberoje family by the Olori Ebi, who resold it to the Ilaje.

“In 2011, they wanted to change the name of this area to Aberoje Street from the initial Ilaje Street and the action led to a serious crisis and about 57 houses belonging to Ilaje people were burnt, while seven people were killed.

“At that time, some people managed to develop their houses, but they burnt them again.If you want to go there now we have to provide escort for you to see things for yourself.

“In 2011, they shot Mr. Augustine Orola, they killed his son Oke Orola, they killed Bariga, Ahmed, Timothy and one David. Those are the names I can remember because I was the one that took their bodies to the mortuary at the General Hospital,Marina. Many others were wounded and injured; I was the one that treated them. We are pleading with the government to please help us provide adequate security and bring the culprits to book.

“On 27th May, 2019, the Ajah boys invaded Ilaje where they looted, burnt houses and killed one Kehinde whose body is still lying in the mortuary. There was a day that four armed men from Ajah came into the community from a corner by the second transformer at the waterside. They shot repeatedly in different directions. They attacked a trader and collected N150, 000 from her.’’

He also alleged that two armed Ajah boys apprehended by soldiers on June 22, 2019 were sponsored by people who wanted to take over their land and build an estate on it.

‘’We have it on good authority that they want to send us away and build an estate on this land.”

On the latest crisis, the Ilaje spokesperson said: “The dredging company started working on the Ilaje water in 2015. The Ilaje did not benefit from them until the ones that came in October 2018 and out of the nine sites in Ilaje waterside, Ajah is controlling six, while three were given to the Ilaje.

“Even at that, their Baale still collects royalties on the three sites given to the Ilaje. The Ajah community has painted the Ilaje black before all Eti Osa indigenes and Lagosians as a whole. Are Ilaje not Yoruba again?’’

“We had a peace meeting with the Area Commander,the DPO and chairman of Eti Osa Local Government and other stakeholders and at the end of the meeting, the two communities signed a peace accord on 20th of June, 2019.

One of the victims of the attack, Mr Daniel Akinokunuwa,spoke with pains on how his house was burnt.
His words: “I live in Ajah-Isale Ijebu. I was not at home when they came and burnt my house.

“If I was around they would have killed me. They did not burn only my house they burnt some houses close to mine too.”

A 16-year-old student in the community identified simply as Ayomide also confirmed that pupils were being harassed on their way to school by Ajah boys.

She said: “the Ajah boys have been attacking us on our way to school. We are now afraid of going to school.’’ The secretary general of Ajah community, Mr Kazeem Odulami, who spoke with The Nation, however blamed the attack on Ilaje hoodlums.

He claimed the Ilaje community had been sponsoring hoodlums to attack Ajah indigenes.

“We are the host community and they are not disputing that. We are not fighting with them (Ilajes) over any land.

“They are the ones causing problem. The authority over the land in Ajah lies with our Baale. The clash usually starts with them. They are cultists and they belong to different groups. They always attribute clashes between their rival cult groups to us. We don’t have to fight them over any land.

“Initially, we could not fathom what their grouse with us was but we realised later that they are entertaining fears that we want to take over their land and build an estate. One of them said it during one of our meetings. They are the ones bringing people through the waterways to attack us.

He added: “When they wanted to start the dredging business, they brought dredgers to the palace here and the Baale gave them his blessings. They said that they wanted to start mechanised dredging in the area and we did not disagree with them. For three years, nothing was brought to our Baale, despite the fact that he has the right to collect royalties there. There are factions among them.

“They are fighting over the dredging site. Our Baale was arrested following fictitious petitions from them in the past and he was always vindicated.

“He has no interest in their land. The latest crisis started between two brothers of the same father, who belong to different cults and a clash ensued between their groups at a naming ceremony in their community.”

The secretary of the Ojupon/Ogunsemo ruling house of Ajah, Alhaji Kabiru Yekeen, also denied the claims by the Ilajes.

He said:”They are acting on the rumour that we want to take over their land. They act on that to attack our people.

“Only a few weeks back, one of our sons, Oloyo, was killed and his body burnt. Those who attempted to recover his body were also shot. They hide under cultism to attack us.’’

READ  Police Officers Arrested Over Fatal Shooting Of Nigerian Lady And Boyfriend In Ajegule; Inspector On The Run (photos)

He claimed that there are members of other ethnic groups even in Ilaje and there is no way Ajah market women would have identified and singled out Ilaje women for expulsion from the market.

A trader in Ajah, Mrs Bilikis Eshinlokun, said she had abandoned her house following incessant attacks on the community.

She said: “I have also abandoned my house for these people. They come with dangerous weapons, shooting and attacking people. They robbed, raped and attacked many residents of Isale Ijebu. I cannot sleep in this place again. I come out in the morning and return to sleep in another place in the evening. The government should act fast.”

A student of Olomu Secondary School, Ajah, who pleaded for anonymity, said many students had stopped coming to school for fear of being attacked by the Ilaje boys.

Contacted, police spokesman, Mr Bala Elkana, a Deputy Superintendent of Police (DSP) said that necessary measures were being taken to further conflicts and restore the confidence of the two communities in the police.

“The Commissioner of Police, Zubairu Muazu, personally visited the communities and met with the leaders of the two communities and assured them of the readiness of the police to put a total end to the crisis.

‘’The commissioner has created a buffer point for policemen to permanently stay in the communities till the crisis is completely over. Mobile policemen and Armoured Personnel Carriers (APC) have been deployed in the two communities,”

“It is not fair for anybody to say that the police are taking sides with any of the communities. It is the duty of the police to protect all citizens.”