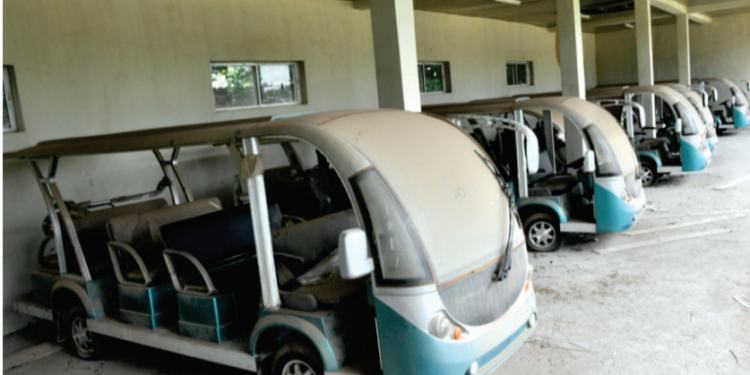 Ten years after they were purchased for the use of federal lawmakers, 15 electric cars (carts) are laying waste at the National Assembly.

The carts have not been put into use since they were acquired and their existence is even unknown to many.

They are parked in a garage purposely built for them at the annexe of the National Assembly (NASS) after they were ordered for and shipped into the country.

None of the people contacted at the National Assembly could say precisely the reason for acquiring the carts, but in many parts of the world, they are used on golf courses to move people over short distances.

But one source said that at a point in the past, the carts were to be used to supplement the shuttle buses at NASS, especially when the legislature was reviewing its security architecture on the strength of the security challenges posed by Boko Haram.

“But the charging points meant for the cars/carts were never built, hence they have been lying here dormant,” the source said.

“I have no idea why they were bought, but I just know they cost millions of naira,” he added.

Makers of electric carts include Indiana, Ezgo, Yamaha and Volkswagen, amongst others, but the makers of these ones are unknown.

Besides, no one in the National Assembly seems to know how much the carts were bought.

Not even the media department of the National Assembly could venture any insight on the issue.

When the National Assembly’s Director of Information and Publication, Mr. Roland Agada, was asked about the vehicles, he said: “Sincerely, I don’t know anything about them.”

A bill for electric car to be embraced in the country and petrol cars phased out by 2035 was defeated recently in the Senate.

This was years after the electric cars had been purchased by the National Assembly management.

The Senate rejected the bill sponsored by Senator Ben Murray-Bruce which sought to phase out petrol vehicles by 2035.