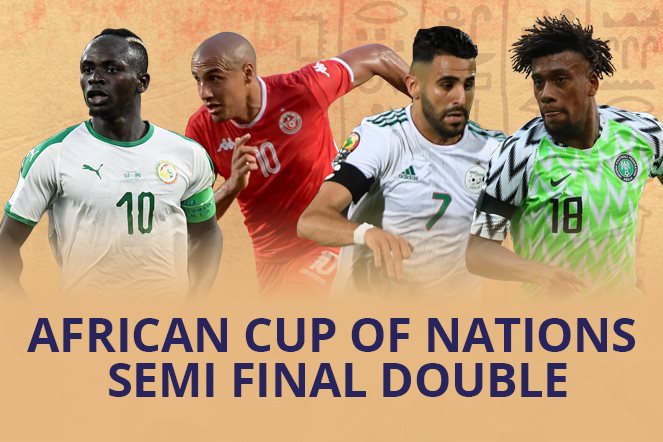 As the 2019 African Cup of Nations (AFCON) reaches its semi-finals stage, there are already upsets and slip-ups. The four remaining teams – Senegal, Nigeria, Algeria, and Tunisia – will on Sunday, July 14 square up in battles of the West against the North. The News Agency of Nigeria previews the difficult tie between the Super Eagles of Nigeria and North African giants Algeria.

So far, the 2019 AFCON has been nothing short of sublime. Having qualified for the tournament by topping their qualification group which included the Republic of Benin, Gambia, and Togo, the North African side seem poised to go one better than their AFCON 2010 outing where they finished fourth. Although Les Fennecs have been eliminated at the group stage in two of their last three AFCON appearances, they have made a strong statement so far at the ongoing AFCON in Egypt.

With a 100 percent record before their quarter-final game against Cote d’Ivoire on Thursday, Algeria had staked a claim to the continental trophy and are strong contenders. Before then, Algeria made a light work of their Group C encounters by beating Kenya 1-0, Tanzania 3-0 and Guinea 3-0; scoring nine goals and conceding none in the process.

What keeps this Algeria side going is a complete and solid team in all departments. We have already mentioned how solid a defense they possess.

Conceding only one goal in five matches (scoring 10 in the process) is simply the mark of solidity and the Les Fennecs are buoyed by that accomplishment.

Their midfield, anchored by Adlane Guedioura and Captain Riyad Mahrez, had been relentless in both the defensive and attacking ends. Their attack, led by Baghdad Bounedjah, had so far in the tournament run opposition defenses riot.

Also crucial to the structure of the Algerian team is the depth of their bench. Bring in Yacine Brahimi, Adam Ounas, Islam Slimani or Andy Delort, and they are able to do as much as the starters.

This much was proved in the game against Cote d’Ivoire when Slimani, coming in for Bounedjah, almost got the winner at extra time but for a fine save by the Elephants’ goalkeeper.

On paper, Les Fennecs will enter the game against the Super Eagles as slight favorites for reasons already stated. They are considered by many making bets as the best team of this AFCON so far. However, as we have previously seen in this year’s tournament, no match is won in advance. And Les Fennecs’ next game would perhaps be their biggest test in the 2019 AFCON. Ironically, the only time Algeria won the tournament was in 1990 when they defeated Nigeria 1-0 in the final on home soil.

Nigeria’s route to the semi-finals of the 2019 AFCON was definitely not as smooth as Algeria’s. The Super Eagles finished second in Group B with six points and below debutants Madagascar. A 3-2 victory against defending champions Cameroon in the second round, followed by a 2-1 win against giant slayers South Africa in the quarter-finals set the stage for Sunday’s encounter with Algeria.

While many analysts have decried the lack of fluidity in the Super Eagles’ play (and correctly so), the three-time champions seemed to get better as the tournament progresses. The Eagles’ inability to keep a clean sheet in their last three games should worry the Coach Gernot Rohr side. They’ve had to come from behind against Cameroon to win 3-2 and needed an 88th-minute goal by defender William Troost-Ekong to see off South Africa 2-1 to progress.

Against a stingy Algerian defense, Nigeria might find it difficult to chase the game or launch a comeback if they trail their defensively cohesive North African opponents. This said Algeria know better than judge Nigeria by mere statistics. The Super Eagles have been one of the most consistent teams in the history of AFCON.

They have got to the semi-finals stage or further in 14 of their 17 AFCON appearances, including 11 of the last 12. Unlike Les Fennecs, AFCON is one tournament the Super Eagles know how to play. And so far in Egypt, one aspect of the Eagles’ set up worthy of mention is the inability of their opponents to read their game.

This news was credited to Gbenga Elegbeleye, former Director-General, National Sports Commission, after the game against South Africa.

“One cannot predict what department the Eagles will focus their play on and this often creates confusion for their opponents.

“You can’t really say this is where the team is good or this is where it is bad. What I have realized is that they approach a game depending on their opponent.

“For instance, against Cameroon, Nigeria played a game worthy of defeating a technical team like Cameroon who were defending champions. The Super Eagles’ attack was key to that victory.

“On the other hand, if you look at the quarter-final game against Bafana Bafana, you’ll observe that we didn’t give them room to operate in the midfield,” he said.

The last time Nigeria won AFCON in South Africa in 2013, they followed a similar unpredictable path to victory. They drew 1-1 against Zambia and Burkina Faso in their first two group matches before beating Ethiopia 2-0 in their final group game to progress into the quarter-finals.

The Super Eagles recorded a 2-1 win against tournament favorites, Cote d’Ivoire in their quarter-final match before thumping Mali (also huge contenders) 4-1 in the semi-finals. They went on to lift the trophy with a 1-0 defeat of Group C foes, Burkina Faso.