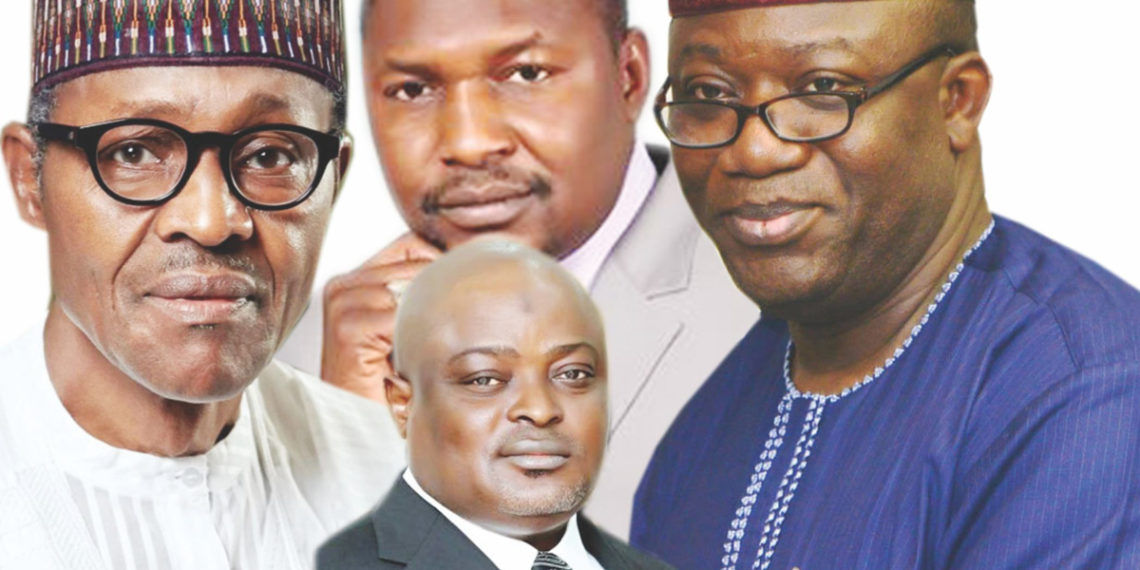 Although President Muhammadu Buhari has signed into law the bill that seeks the autonomy of state Houses of Assembly, Assistant Editor, ‘Dare Odufowokan, reports that there is anxiety in some states that some state governors are out to frustrate the initiative

LAST May, the federal government announced that it had concluded plans to assert the independence of the legislature in the 36 states of the federation and the Federal Capital Territory (FCT). Briefing newsmen on the activities of the Presidential Implementation Committee on the autonomy of state legislature and state judiciary, chaired by the Minister of Justice and Attorney General of the Federation, Abubakar Malami, the Senior Special Assistant to the President on National Assembly matters (Senate) who is also the secretary of the panel, Sen. Ita Enang, said the government has arrived at an effective national implementation strategy for the initiative.

President Muhammadu Buhari last year assented to the constitutional amendments granting autonomy to the two arms of government at the sub-national levels. “We want to ensure the full import and purpose of the initiative, which is release of sums due to the legislature and the judiciary to the heads of these arms of government to be disbursed and applied by them in accordance with approved budget,” Enang said back then, raising the hope of state legislators across the country who had been waiting eagerly, since 2003, for the financial autonomy of the state assemblies, so as to free them from what they called the highhanded interference of state governors in the affairs of the legislative arms of government in the various states of the federation.

Few days after the announcement, Nigerian state governors also pledged to implement financial autonomy for state legislature and judiciary to ensure transparency and openness in governance. They made the pledge through the Nigeria Governors Forum (NGF) at the opening session of a two-day conference on the implementation of the initiative held at Transcorp Hotel, Abuja. The then Chairman of the NGF, Abdulaziz Yari, who was the governor of Zamfara, said the governors will work with the federal government to implement the law. He said the autonomy of the legislature and the judiciary is critical to sustainable development.

Leaving nobody in doubt that he was speaking on behalf of all the governors and insisting that the NGF fully supports Buhari’s reform agenda and shares his passion for transparency and zero tolerance for corruption, Yari said, “We totally aligned with the motion that the legislature and judiciary autonomy is a necessary precondition for an enduring democracy. This enhances efficiency, transparency and accountability in government. May I also assure you that the state governors are collectively committed to the enthronement of a strong and virile democracy in Nigeria and would work with the federal government to achieve the National Implementation Strategy and ultimately ensure full autonomy of the legislature and judiciary at sub-national levels.”

But findings by The Nation revealed that the struggle for the autonomy of the state assemblies may not be over yet in spite of Yari’s promise that the state governors were ready to throw their weight behind Buhari’s quest to have the legislature freed from the apron strings of the executive arms of government in the states. If anything, there are fresh fears that governors may be moving to prevent the issuance of the executive order needed to make the implementation of the initiative compulsory in all states of the federation. “Majority of our governors are still very much unwilling to let go financial control of the assemblies for political reasons,” a presidential source told The Nation.

It was also gathered that while a couple of states, including Lagos State, have started experimenting with some level of implementation as regards the financial autonomy of the legislature, many others are still struggling to convince their governors to adhere to the dictates of President Buhari’s assent to the constitutional amendments granting autonomy. “Hiding under the absence of the much awaited executive order, majority of our governors are still unwilling to even toy with any form of implementation as far as assembly autonomy is concerned. They won’t even release monthly dues to the assembly without pressure,” another source, a former Speaker of a state assembly, added.

Lamenting the current situation recently, the Executive Director, Policy and Legal Advocacy Center (PLAC), Clement Nwankwo, said it is ‘dangerous a situation’ to cripple the legislature and make it unable to function. A situation where the legislature, which actually makes the distinction between democracy and dictatorship, is crippled and made unable to function worsens the reality that democracy represents. Unfortunately only a few clauses of what the National Assembly passed were assented to by Mr. President, but this is very critical in terms of strengthening our democracy, that our legislature is able to function as an independent arm of government, able to moderate the excesses of the executive, particularly at the state level where the development and the transparency of government are very limited.”

Mudashiru Obasa is the Speaker of the Lagos State House of Assembly and he has never hidden his support for the autonomy of the legislature. Recently, in one of his writings on the matter, he said “Since power belongs to the people in a democratic system, those elected to exercise such authority should do so to the benefit of the people. The legislature, as the closest arm of government to the people, must be seen to be independent enough to exercise the powers bestowed on it by the constitution. Any attempt to abridge this constitutionally guaranteed right, therefore, must be seen as an aberration. It is, therefore, laudable that the government is making moves to correct this lapse in our democracy.

“The development is courtesy of the Fourth Alteration Bill signed into law recently by President Muhammadu Buhari. The Fourth Alteration Act grants financial autonomy to both the state houses of assembly and judiciaries, which empowers them to receive their allocations straight from the Federation Account (FA).

Expectedly, the law restores and gives practical affirmation to the globally acclaimed and centuries entrenched principle of separation of powers which is the hallmark of democratic governance. The 1999 Constitution of Nigeria duly recognises the concept but its practice, especially among the federating units, has been quite problematic.”

The Nation gathered that determined to see through the implementation of Buhari’s directive, some state assembly Speakers have been meeting to discuss how to ensure that the initiative is given more support by the Presidency and the National Assembly. “It is a good thing the President assented to the amendment, but across the country, the implementation is still abysmally low. Just a couple of states are doing something with it as we speak. We have resolved to ensure that all governors respect the need for full autonomy of the assemblies as desired by President Buhari,” a source said.

Another source, a high ranking state lawmaker from Delta State, accused the state governors of paying lip service to the initiative and playing hide-and-seek with the implementation of the amendment. “The governors are still very adamant about implementing the initiative. Don’t be deceived by the lip services they are paying to the issue. But we are determined to force their hands now. Don’t forget that the Senate on May 8, 2019 adopted a motion demanding some stakeholders like State Houses of Assembly, the governors and the Presidency to expedite action on granting financial autonomy to state assemblies across the country. It was done because they saw the unwillingness of the governors,” he said.

Last Monday, the Speaker of Ogun State House of Assembly, Olakunle Oluomo, says there will be a political revolution across the country immediately President Buhari issued the proposed Executive Order granting autonomy to state assemblies and the judiciary. He spoke in Abeokuta, Ogun State capital, during a legislative luncheon organised by the Committee for the Defence of Human Rights (CDHR), tagged: “Legislative Agenda for Good Governance” in his honour. Oluomo submitted that legislative powers had only existed on paper because the legislature could not do anything without the governors’ approvals.

Speaking about the amendment, the Ogun Speaker said “When the governors heard that it has been signed into law, they went haywire. They said it would not work and it has not worked up till today.” Revealing how the state legislatures convinced Buhari to sign the amendment without the knowledge of the governors, he said “When Buhari wanted to sign the bill into law; we played some ‘magomago’. We ensured that the Governors’ Forum was not informed. I, somebody from Enugu, others from Katsina and Plateau states, went, overnight, to the presidency and met a friend who was a legislator at the state level. We told him “go and find a formula for us to get the bill assented before the Governors’ Forum knows.” And that was the deal.

“So, when they were taking the bill for Buhari’s assent, the governors were not aware. If they were aware, they would have used it as one of the baits for him (Buhari) to get second term in office.” Oluomo urged President Buhari to swiftly issue the Order on the implementation of the autonomy, saying with that, legislators would demonstrate that “We’re not docile. We are not foolish. The moment that’s done, you will see revolution. Legislators at the state level are not docile. They are not foolish. The truth of the matter is “you provide food for the dog, and you hold a stick. How would you allow the dog to eat the food? The dog will be afraid to eat the food.”

In what is obviously an open support for state assemblies in the coming struggle for the full implementation of assembly autonomy across the country, Obasa, who also chairs the Conference of State Assembly Speakers, said, “to enhance financial autonomy for the state Houses of Assembly and Judiciary for instance, the legislature, having been saddled with the power of making law, is expected to come up with an enabling law, like financial management law that will state how to go about the state financial autonomy without fear or favour. For instance in Lagos State, we have Assembly Service Commission and Lagos State Judiciary Self Accounting Law that ensure the independence of the legislature to a large extent.