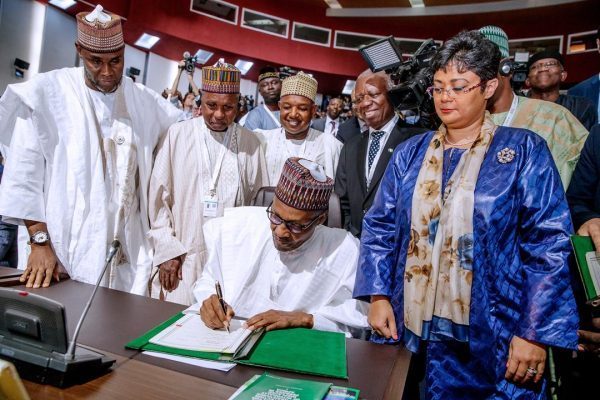 President Buhari appended his signature to the treaty at exactly 10: 47 a.m. in the presence of African Heads of State and Government, delegates and representatives from the private sector, civil society and the media attending the 12thExtraordinary Summit of the African Union on Launch of the Operational Phase of the AfCFTA.

Buhari, after signing the agreement, according to a statement by the Special Adviser on Media and publicity, Femi Adesina, declared that Nigeria’s commitment to trade and African integration have never been in doubt nor was it ever under threat.

He told the Summit that Nigeria will build on the event by proceeding expeditiously with the ratification of the AfCFTA.

‘‘Nigeria wishes to emphasize that free trade must also be fair trade.

‘‘As African leaders, our attention should now focus on implementing the AfCFTA in a way that develops our economies and creates jobs for our young, dynamic and hardworking population.

‘‘I wish to assure you, that Nigeria shall sustain its strong leadership role in Africa, in the implementation of the AfCFTA. We shall also continue to engage, constructively with all African countries to build the Africa that we want,’’ President Buhari said.

The Nigerian leader also congratulated Ghana on being selected to host the Secretariat of the AfCFTA.

President Buhari stated further: ‘‘I have just had the honour of signing the agreement establishing the African Continental Free Trade Area (AfCFTA), on behalf of my country, the Federal Republic of Nigeria.

‘‘This is coming over a year since the AfCFTA Agreement was opened for signature in Kigali, Rwanda, at the 10th Extraordinary Summit of the African Union, on 21st March 2018.

‘‘In fact, you will recall that the treaty establishing the African Economic Community was signed in Abuja in 1991.

‘‘We fully understand the potential of the AfCFTA to transform trade in Africa and contribute towards solving some of the continent’s challenges, whether security, economic or corruption.

‘‘But it is also clear to us that for AfCFTA to succeed, we need the full support and buy-in of our private sector and civil society stakeholders and the public in general.

‘‘It is against this background that we embarked on an extensive nationwide consultation and sensitization programme of our domestic stakeholders on the AfCFTA.

‘‘Our consultations and assessments reaffirmed that the AfCFTA can be a platform for African manufacturers of goods and providers of service to construct regional value chains for made in Africa goods and services.

‘‘It was also obvious that we have a lot of work to do to prepare our nation to achieve our vision for intra-African trade which is the free movement of ‘made in Africa goods’ ”.

‘‘Some of the critical challenges that we identified will require our collective action as a Union and we will be presenting them for consideration at the appropriate AfCFTA fora.

‘‘Examples are tackling injurious trade practices by third parties and attracting the investment we need to grow local manufacturing and service capacities.’’ he said

President Buhari noted that Nigeria’s signing of the AfCFTA and its Operational Launch at the 12th Extraordinary Summit was an additional major step. forward on the AU’s Agenda 2063.

With Nigeria and Benin Republic signing the Agreement at the Summit, 54 out of 55 African countries have signed the world’s largest free trade area deal, encompassing 55 countries and 1.2 billion people.

Eritrea is the only African country yet to sign the agreement.

The AfCFTA Agreement entered into force on May 30, 2019 thirty days after having received the twenty-second instrument of ratification on 29 April, 2019 in conformity with legal provision.