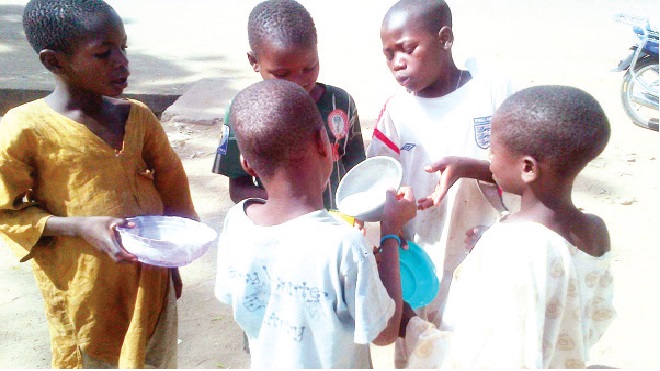 Nasarawa State Governor Abdullahi Sule has declared about 10m children operating the Almajiri system in the north are simply beggars, spending more time on the streets rather than learning the Quran.

He appealed to parents in the north who give birth to children without means of taking care of them, thereby subjecting them to begging in the name of Almajiri Islamic religious education to desist or face sanctions.

He said the Almajiri system of education is completely misunderstood, just like the Ruga project which came with good potentials was misunderstood by Nigerians and the government had to back out.

According to him: “Government must establish that it is a crime to abuse a child, it is a crime to bring children to this world and send them to Almajiri system where you cannot take care of them.

“It is a crime to send children on the street begging. That is what we are trying to do, parents must take responsibility.

‘’You can’t bring children to this world and dump them somewhere and expect somebody else to take care of them, so parents must not shy away from responsibility.”

He explained in Nasarawa state where Almajiri system has become a menace and security threat, his government is approaching insecurity in three different ways which include providing jobs through agriculture, vocational and technical skills as well as ensuring that parents who send their children to Almajiri school are able to take care of such children and a bill to that effect will soon be in place.

He vowed that Nasarawa under his leadership will make sure that begging on the street is a crime, adding that the rights of children must be protected.

The governor said that begging is not part of the concept of Almajiri system of Islamic education and shifted the blame on parents who give birth to children and dump them into the streets for begging.