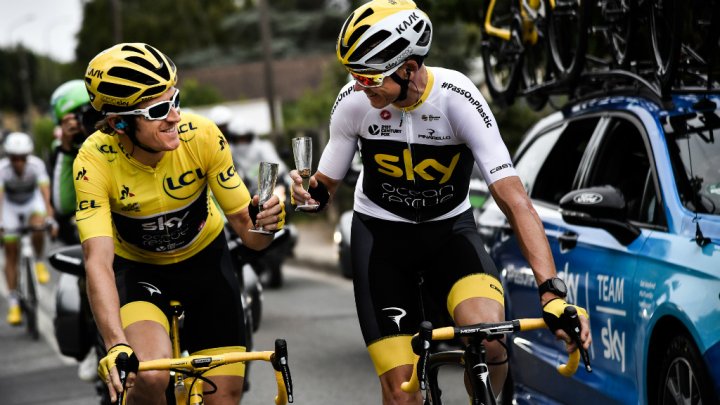 Defending champion Geraint Thomas will face mountains galore and a wide cast of rivals, even within the affable Welshman’s own camp, when the three-week Tour de France begins on the cobbled streets of Brussels on Saturday.

A bike-mad public is expected to give this 106th edition of the Tour a raucous sendoff 50 years after the great Belgian won the first of his five Tours.

Thursday’s city-centre parade of the 22 eight-man teams was cheered all the way along the route with fans mobbing riders at their team buses.

Ineos co-leaders Thomas and Egan Bernal were given CIA-style running security as other star riders good naturedly signed scrapbooks and posed for selfies.

Four-time winner Chris Froome misses out after a bone-crunching fall last month that blew the field wide open. The team chief of Spanish team Movistar, Eusebio Unzue, has described the remaining peloton as “a flock of sheep without a shepherd”.

“Without Chris Froome the Tour is not the same race,” Tour chief Christian Prudhomme admitted, with the British team having won six of the last seven editions since Bradley Wiggins clinched their first.

In the battle for the yellow jersey, Froome’s long-time deputy and current champion Thomas takes centre stage, the popular Welshman attacking a mountain-packed Tour with Ineos teammate Bernal, the 22-year-old Colombian revelation, as his main rival.

Thomas fell and banged his head during the Tour de Suisse on June 18. He escaped serious injury but it hampered his training for the big race in France.

His multi-talented teammate Bernal, who then won with panache in Switzerland, would become the youngest post-war Tour de France winner and the first ever Colombian to win if he can outstrip Thomas in the manner which the Welshman himself unexpectedly did to Froome last season.

“Egan and I are not rivals,” Thomas told reporters at Team Ineos’s pre-race news conference. “Hopefully one of us wins and it’s really uneventful.

“There are a lot of contenders this year for the podium but hopefully they’ll be a couple of steps lower than me and Egan,” he added.

Indeed, there are as many candidates for victory on the 2019 Tour as there are mountains.

“I decided to win this or die,” said Fuglsang after winning a recent classic. “At 34, I finally grew up.”

France itself, bereft of a Tour de France champion since Bernard Hinault in 1985, also has two good contenders in Romain Bardet and Thibaut Pinot, who both spent their youth shuttling up and down mountains in the Massif Central and the Vosges mountains.

“It’s been a while, but I’ve got that winning feeling,” Pinot told AFP this week.

“I can’t wait for the race to start,” he said at Thursday’s parade.

Another massive loss for British fans is the absence of seasoned sprinter Mark Cavendish, who won 30 stages but has been struck down by the weakening Epstein Bar virus.

“I’m heart-broken,” said the 34-year-old former world champion, who in his prime between 2008 and 2013 looked unbeatable on a flat sprint finish.

Current speed-king Italian champion Elia Viviani would be many people’s tip to bid for the green sprint jersey, but he will face ferocious competition from triple world champion and crowd favourite, the flamboyant Slovak Peter Sagan, who was wildly lauded along the parade route Thursday.

The 2019 Tour is remarkable for its altitude, climbing over 2000m seven times, with three summit finishes at altitude, one in the Pyrenees, one in the Vosges and one in the Alps.

It is in the Alps however, at the very end of the Tour, where things will be decided with an unprecedented three consecutive, ultra-mountainous challenges to test any potential champion to the extreme.