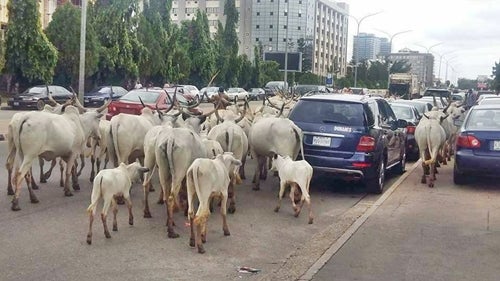 It was gathered the blockade was over the alleged killing of a truck driver conveying cattle at Issele-Azagba junction near Asaba, Delta State capital.

The swift intervention of the police doused tension building up after some youths in the community and commuters started planning to attack the herders.

The Nation gathered the deceased identified as Adamu Adamu, was allegedly killed by revenue collectors on Thursday night.

As a result of the blockade, travellers to and from the eastern part, were stranded for several hours, as the herders insisted on retaliation.

Entreaties by drivers of commercial vehicles to the aggrieved herders were ignored, stretching line of vehicles on both lanes of the dual carriageway for several kilometers.

One of the leaders of the Hausa/Fulani community, Musa Jeje, said they had previously protested to the authorities about the extortion on the road and at that spot in particular.

According to him the alleged murderers escaped.

He admitted he was yet to be properly briefed on what led to the killing.

Two senior officers from the Delta State Police Command including ACP A. U. Chuso and CSP Gbenga Ojo led other members of the police team to open the road and free the vehicular traffic hold-up.

Their intervention restored calm and normalcy to the area as trapped vehicles slowly continued their journeys to their respective destinations.

Commissioner of Police, Mr. Adeyinka Adeleke later arrived the scene before the corpse of the deceased truck driver was moved away.