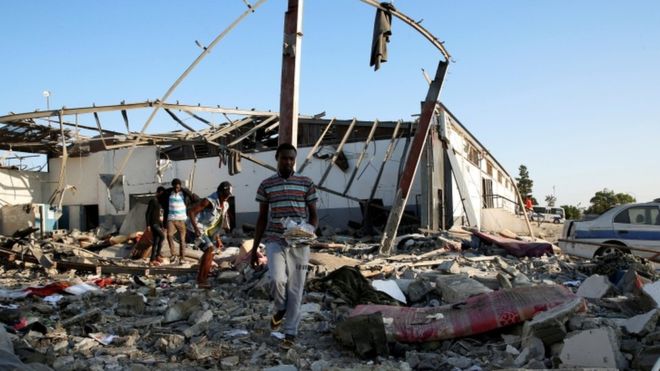 Nine Nigerians were among those killed during an airstrike on a migration detention centre in Tripoli, Libya, it was learnt.

Forty-four people were killed in the unfortunate incident that occurred in the early hours of Wednesday.

President Muhammadu Buhari on Wednesday condemned the airstrike and described it as “inhuman, wicked and callous attack on helpless and defenceless people”.

In a statement, she said it was disheartening that nine Nigerians have been identified as victims in the unfortunate incident.

According to Abdurahman Balogun, the commission’s media aide, Mrs. Dabiri-Erewa said it was regrettable that migrants survived a treacherous journey only to be killed in someone else’s war in Libya.

She said it was painful that the affected Nigerians, who were due to be airlifted back to Nigeria, were cut down in their prime.

The NIDCOM boss reiterated calls for Nigerians especially the youths to shun movement into hostile countries, and if they must travel, go legally with a legitimate mission to those countries.

Mrs. Dabiri-Erewa prayed for the repose of the souls of all that died in the airstrike and sent condolence message to the families of the victims Noting that over 13.000 migrants had been brought home so far from Libya, she thanked the International Organisation for Migration (IOM), National Emeergency Agency (NEMA) and other international agencies involved in the evacuation of the migrants, while she called on the UN to hasten up in the protection of other detention centres from such attacks.

READ  The number of prisoners jailed in Europe on terrorism charges at 20-year high, says report

The statement reads: “At least 44 people were reportedly killed including nine Nigerians at a detention center in Tajoura, east of Tripoli in Libya, Wednesday morning through an airstrike attack.

“It was learnt that some of those killed had been profiled to leave the country in the coming days. “In addition to those killed, IOM said that more than 180 others staying in the same detention center were registered to return to their home countries through the U.N. agency’s voluntary migrant return program, which helps arrange their documents and transport.”