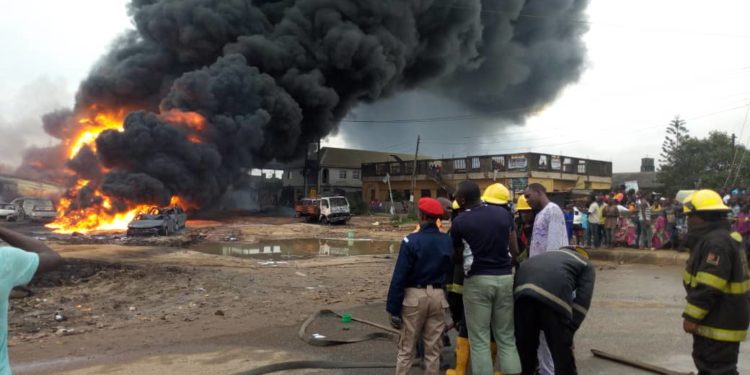 Two people have been confirmed dead and over 30 vehicles burnt following the early morning fire that engulfed the Nigerian National Petroleum Corporation (NNPC) pipeline at Ijegun, a Lagos suburb.

Suspected pipeline vandals were said to have ignited the fire at about 5am on Thursday at Fire Junction, Ijegun, in a bid to prevent security operatives from pursuing them.

According to the Lagos State Emergency Management Agency (LASEMA), the vandals had siphoned Premium Motor Spirit (PMS) into a 33,000 litre capacity tanker and were loading a second one when security operatives intercepted them.

Chief Executive Officer (CEO) LASEMA Femi Oke-Osanyetolu, said the vandals spilled some of the PMS which entered drainages while fleeing and allegedly lit a fire that followed the spilled content backward

“The fire then spread back to the pipeline, the point where the vandals had siphoned the fuel and exploded with escalating fire which led to two fatalities and over 30 vehicles burnt.

“The actual loss will be determined upon conducting post disaster enumeration after the fire has been put out. Responders at the scene include Lagos State Fire Service, Police and Nigerian Security and Civil Defence Corps (NSCDC).”