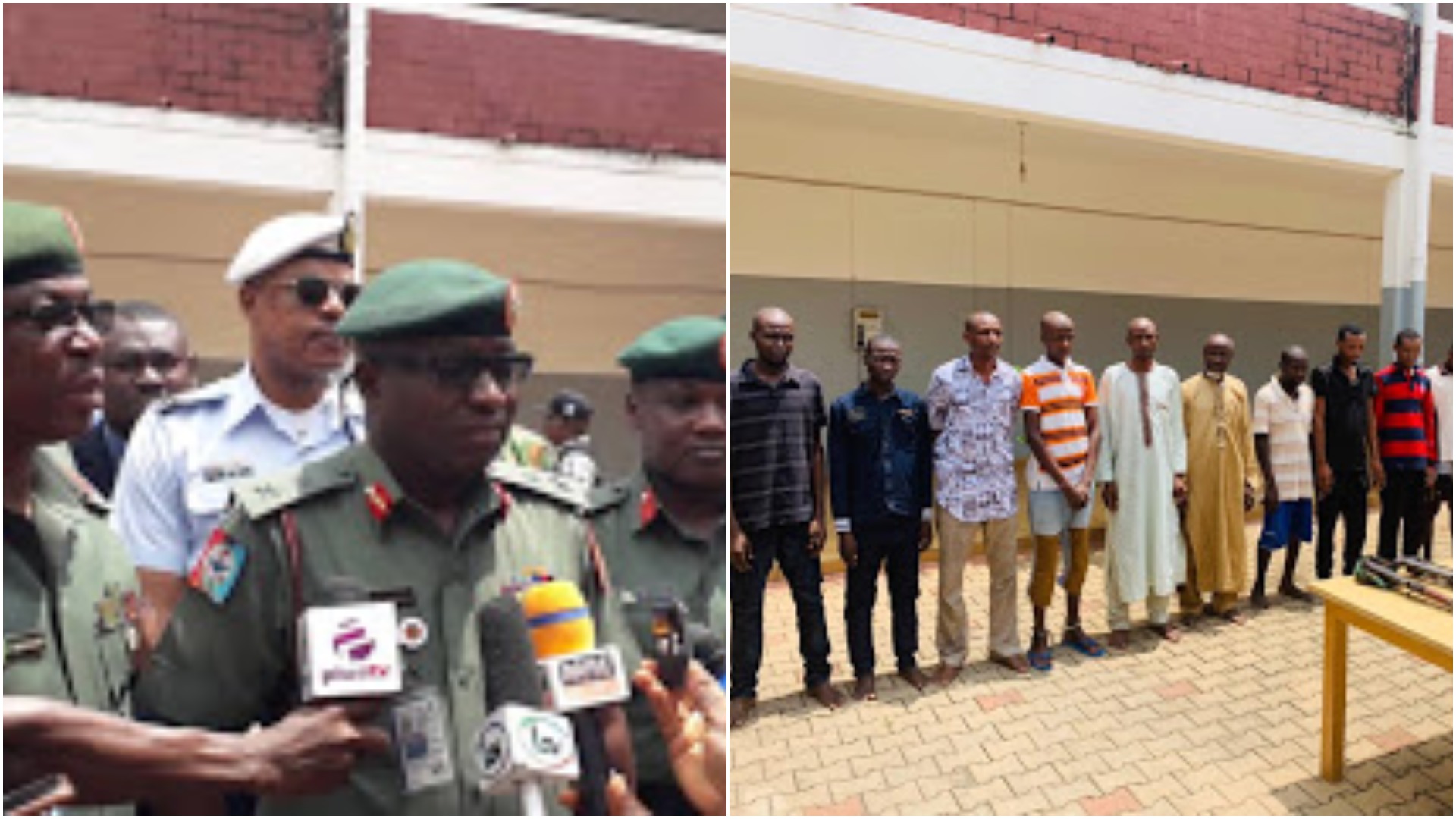 The suspects were paraded at the DHQ Garrison located at Mogadishu Military Cantonment, Abuja, for their direct involvement in the killing of the former CDS.

Briefing reporters on the circumstances surrounding Air Chief Marshal Badeh’s gruesome murder, the Chairman of the Joint Investigative Panel, Maj.-Gen. Bamidele Shafa, said the killing was a purely criminal act that had no political undertone.

He said based on the detailed investigations carried out by the panel which was constituted by the CDS, Gen. Abayomi Olonisakin, 20 persons were involved in the murder of his predecessor.

According to him, 15 of the suspects in custody of security operatives have confessed to committing the crime, noting that five others are still at large. He promised that those at large would be apprehended.

He added that the panel was assisted by 21 investigators and operatives also drawn from the services and agencies.

The panel chairman also said the service personnel that were with the late CDS at the time of his murder had been released to their respective services for appropriate actions for their acts of commission or omission.

He further explained that the Joint Investigation Panel, which was coordinated by the DIA, interviewed 36 witnesses, visited the scene of incident and the homes of the suspects arrested in connection to the murder.

According to him, searches were conducted in the homes of the suspects where one AK47 rifle, one Dane gun and other dangerous items were recovered.

Maj.-Gen. Shafa, who said the panel was guided by its terms of reference in carrying out its assignment, gave the names of the major suspects as Aliyu Usman (aka Chiroma); Shuaibu Rabo; Yahaya Nuhu; Musa Mohammed (aka Alhaji Lamido Tahara); Ibrahim Abdullahi (aka Baba) and Jibrin Ibrahim.

He said those arrested but discovered after thorough investigation that they had nothing to do with the matter had been released.

Maj.-Gen Shafa said: “Aside the killing of Air Chief Marshal Badeh, the suspects also admitted that they kidnapped one Joseph Okpetu, an engineer, who was later released after the payment of N2 million ransom.

Jibrin Ibrahim, 51, is the owner of the SIM cards used in demanding and negotiating for ransom before the release of Okpetu, a friend of the late Air Chief Marshal Badeh.

The panel also established that Alhaji Maube Gainin was the mastermind and facilitator of the attack on and killing of the late CDS.

Maj.-Gen. Shafa went further: “Aliyu Usman AKA Chiroma is 35 years old. He is a major suspect and the ring leader of the notorious gang.

“He was arrested in Kowo Panda Development Area of Nasarawa state. He confessed to how he was contracted by one Alhaji Maube Gaim’ living in Kare village.

“Aliyu Usman played the role of leading the attack by recruiting 6 other gang members to attack and rob a ‘wealthy man’ who owns a farm within Panda area.

“The wealthy man later turned out to be Air Chief Marshal Badeh (rtd). He invited other gang members for the attack and supplied 5 AK 47 rifles and a single barrel gun.

“He also admitted that he carted away a black bag containing unspecified amount of money from the deceased’s vehicle, which he handed over to Abdullahi Ibrahim aka Baba who also admitted to receiving the bag in question.

“Shuaibu Rabo is 25 years. He was identified as the second in command of the gang. He was arrested in Barde village in Kaduna state.

“He confessed that Usman Aliyu aka Chiroma brought the j0b to him in Jitata asking him to mobilise other members of the gang from Barde village, where he lives. He was responsible for recruiting 2 others namely Yahaya Nuhu and Rabo for the attack.”