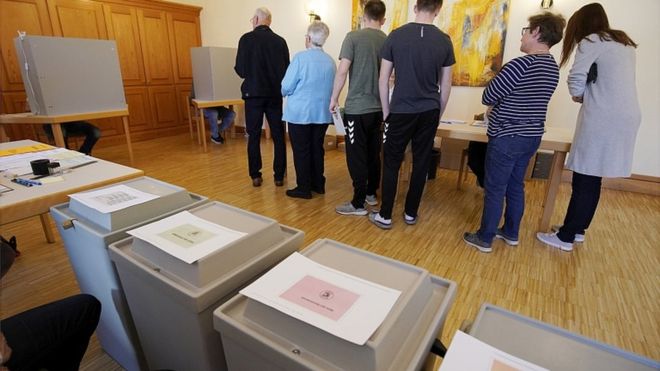 The European Council, which is made up of all EU28 leaders, nominated von der Leyen on the third straight day of gruelling talks. She will be joined by fellow nominees Charles Michel as European Council president, Josep Borrell Fontelles as EU foreign policy chief, and Christine Lagarde to lead the European Central Bank.

Von der Leyen’s appointment — if confirmed — would ensure the top post stays within the European People’s Party, the centre-right political group that received the most votes in May’s European elections. But it remains to be seen if the European Parliament would embrace a politician who is not a Spitzenkandidat.

The European Parliament must approve the nomination of von der Leyen by an absolute majority, which is half of the existing MEPs plus one. If von der Leyen does not get the majority backing as needed, then it’s back to the drawing board. EU28 leaders within the European Council will then need to propose another candidate within a month’s time.

Who is von der Leyen?

Once thought to be a potential successor to German Chancellor Angela Merkel, von der Leyen became the country’s first woman defence minister in December 2013 and has held the post since.

She entered politics later in life, at the age of 43, but became familiar with the life of a diplomat at a young age. Her father, Ernst Albrecht, was the minister-president of Lower Saxony and the former director-general of the European Commission, among other posts, and von der Leyen herself was born in Brussels.

The 60-year-old defence minister, a close ally of Merkel, became a member of the CDU in 1990 and held various local political positions within the Hanover region between 2001-2004. Von der Leyen, a medical doctor and researcher by training, was then elected to Lower Saxony’s state parliament in 2003 and became a cabinet member as the minister for social affairs, women, family affairs and health.

Her political ambitions hastened in 2005 when Merkel appointed her federal minister of family affairs, senior citizens, women and youth. In 2009, von der Leyen was elected to the Bundestag, or German federal parliament, and was tapped as the federal minister of labor and social affairs until 2013, when she became defence minister.

Reviews have been mixed about Von der Leyen’s tenure as defence minister — and she is not without controversy. In December last year, German opposition parties launched a parliamentary investigation into von der Leyen’s role in a spending scandal involving her ministry and the allocation of multi-million euro contracts to outside consultants.

Von der Leyen in November said of the nepotism scandal: “There were violations of the provisions guarding the awarding of contracts.”

“The involvement of external parties did not always proceed correctly. That should not be allowed to happen,” she said.

Von der Leyen was in 2015 accused — and later cleared— of cheating on her PhD thesis despite instances of plagiarism. “We’re talking about mistakes, not about purposeful wrongdoing,” the university president said when the investigation was concluded in 2016.

Her nomination as Commission president comes at a time when her influence in domestic politics wanes. At the end of 2018, when five deputy spots were up for grabs under the CDU party’s new leader Annegret Kramp-Karrenbauer, von der Leyen received the fewest number of votes among her colleagues.

Spitzenkandiat process to be tested

The sense of urgency on the third day of negotiations at the Council stems from the new European Parliament taking their seats for the first time in Strasbourg. Among Tuesday’s parliament agenda is setting a deadline for nominations for the parliament’s president with the voting planned for Wednesday. While the president is elected by incoming MEPs, the post is nonetheless part of backdoor horsetrading deals for the Commission’s top jobs.

Von der Leyen’s nomination will test parliament’s will to stand by the Spitzenkandidat process, which is non-legally binding arrangement that sees the lead candidate of the largest political group with the mandate to lead the Commission presidency. European Parliament President Antonio Tajani has continually called for the Spitzenkandidat process to be respected by the EU Council ⁠— but many EU leaders, including Emmanuel Macron, have been critical of it.

The Council’s previous compromise on Sunday had been to name EPP Spitzenkandidat Manfred Weber as the European Parliament president and to give the Commission job to the Socialists’ lead candidate Frans Timmermans, who France and Spain strongly support.

Timmermans, however, remained unpalatable to eastern EU states such as Hungary and Poland, due to his role in the bloc’s rule of law probes against their nationalist governments.

Czech Prime Minister Andrej Babiš said on Tuesday in Brussels, “The [Visegrad Four], we are very simple. We want somebody on the presidency of the commission who doesn’t have a negative view about our region.”

“Mr. Timmermans is not acceptable for us.”

But the idea of von der Leyen in the top job may prove too much for socialists, especially within Germany.

Former European Parliament President Martin Schulz, a German socialist politician, blasted the defence minister on Twitter, saying: “A victory by Orban & Co. They have prevented Timmermans, who stands for the rule of law …. the Spitzenkandidat process is dead.”

“Von der Leyen is the weakest minister here. That seems to be enough to become head of the Commission.”