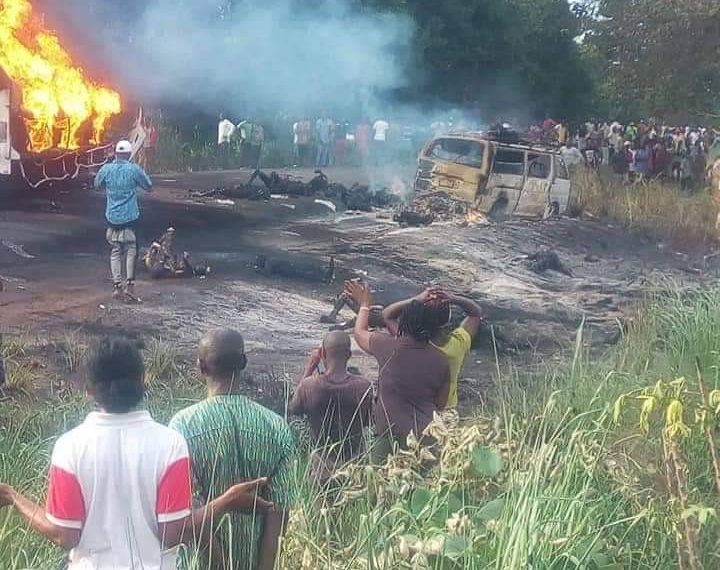 Several people were on Monday reportedly roasted to death after a tanker loaded with petroleum product (PMS) skidded off the road and exploded in Benue.

They tragedy occurred in Ahumbe village along Aliade -Makurdi federal highway in Gwer East Local Government Area of the state at about 5pm.

Although, it could not yet be ascertained the exact number of people killed in the incident, some eyewitnesses said the casualty figure might be over 50.

According to an eye witness, Mr. Austin Nembe, who spoke from the scene of the accident, said the tanker which was conveying fuel from the eastern part of the country, heading for Makurdi, lost control while trying to dodge a pothole and fell off the road.

“As soon as it fell, many villagers from the area and other adjoining villages moved to the scene and started scooping fuel. As they were evacuating the fuel, they were hitting the metal tanker with iron so as to have enough space to drain the fuel more freely, then suddenly the tanker exploded and in a twinkle of an eye, there was fire everywhere.

“Another vehicle, a bus with about 14 passengers ran into the incident and the entire passengers on board were all consumed by the explosion. There was an explosion at the time that the bus was passing and all the passengers on the bus also got burnt.

“Many people were roasted beyond recognition. The sight is so gory and as I speak to you now, the fire is still on and people are running helter-skelter in confusion here.”

The Benue State Police Command, through its Public Relations Officer (PPRO), DSP Catherine Anene, confirmed the story but could not give the exact causality figure.

However, Sector Commander on the Federal Road Safety Corps (FRSC), Aliyu Baba, who was at the scene of the accident, confirmed about ten people dead but that the exact number of death could only be given after the fire had been put out.

Aliyu also noted that over 50 people who sustained various degrees of burns in the inferno were being moved to various hospitals in the town at the time of this report.

“We are yet to ascertain the real number of the dead but the fire is still coming from the nozzle of the tanker. The tanker fell in the neighbourhood and many shops were also burnt.”