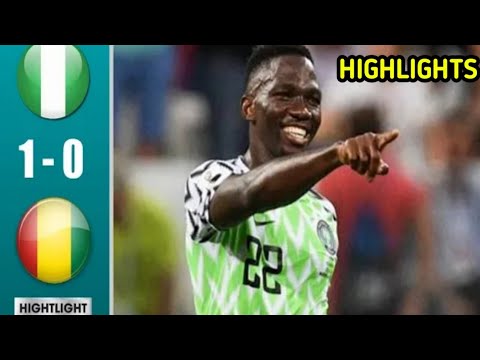 Nigeria come into the game on Wednesday, against group member Guinea at the Alexandria Stadium, on the back of a 1-0 win in their opening clash with Burundi.

Despite enjoying much of the possession in that game, they managed to find the back of the net just once in their fifteen attempts at goal.

Gernot Rohr’s side will have to put on a much more convincing display against their counterparts this week if they are to continuing staying at the top of the table.

Guinea broke the deadlock in their opening fixture against Madagascar with a sublimely cool finish from Sory Kaba who chipped the ball over the keeper, who had rushed off his line, and slotted home into an empty net.

However, they soon went from being a goal up at the break to a goal down fifteen minutes from the restart. A rash challenge by Roman Metanire in his own penalty area left the referee no alternative but to signal a penalty for Paul Put’s side, which Francois Kamano converted to bring the scores to 2-2.

The clash between the two teams is certainly going to be a test of wills, with both the teams’ eying the win.

The Nigerians are currently occupying the top spot in the group, while their counterparts are on second, level on points with Madagascar.

The teams have met each other on eight occasions.
Nigeria have managed to come out on top twice while their counterparts have three wins to their name.
The match ended in a stalemate at 0-0, the last time the two teams met.
Both the teams have not managed to win their clashes with each other by a goal difference of more than one goal.

Nigeria vs Guinea Prediction
The second round clash for Paul Put’s side is likely to see them succumb to their first defeat in their African Cup of Nations campaign. His team have been struggling to find a win in all of their last five matches, with three ending in a draw while losing the other two.

Their meeting with the Nigerians on Wednesday is unlikely to gift them with their first win, especially if they continue to lack quality in their own defensive third.

Gernot Rohr’s men are without a win in just one of their last five matches. Although they did not pull off the most robust of performances in their previous tie, the team have been consistent in finding the back of the net in almost every game, and in keeping a clean sheet.

The match is unlikely to be a high scoring one, with the win looking almost certain for the Nigerians.