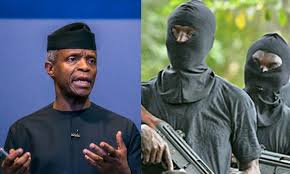 The presidency has made clarifications on the statement made by Vice President Yemi Osinbajo in New York on Nigeria’s security situation.

Laolu Akande, Osinbajo’s spokesman, in a statement on Tuesday, said that the vice president was quoted out of context as he never said that kidnapping in Nigeria was exaggerated.

“Our attention has been drawn to misleading reports in a section of the media purportedly made by and attributed to Vice President Yemi Osinbajo on the security situation in Nigeria, in New York.

”For the purpose of clarity, and the records, it is pertinent to state that Osinbajo was entirely misquoted and his words taken out of context in the said media reports especially those that quoted him as saying that.

“Kidnapping in Nigeria is exaggerated and not entirely new.”

He said that nowhere in the Vice President’s remarks at the town hall meeting with the Nigerian community did he use the word “exaggerated”; not even by implication.

Akande said that the vice president’s remarks about the social media being hysterical was a general response to comments made by participants at the meeting.

Nigerians had asked about information on happenings in Nigeria especially as they relate to security being shared on social media platforms by unverified sources.