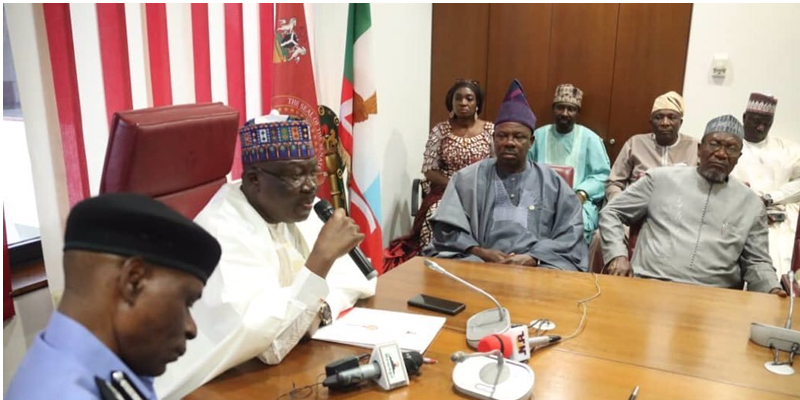 The Inspector-General of Police, Mohammed Adamu, met with Ibikunle Amosun at the Senate on Tuesday, but did not take the embattled former governor in for questioning.

Mr Amosun has come under public backlash and a growing chorus for his arrest after it was revealed how he handed over a large cache of weapons to Ogun State police commissioner, Bashir Makama.

The handover occurred barely a few hours before Mr Amosun concluded his eight years as governor on May 29.

Calls for Mr Amosun to be arrested transcended political lines on Tuesday, with most commentators expressing fears about the country’s porous security architecture.

It was also learnt that Mr Makama did not report receipt of the weapons to the Force Headquarters, which top police sources said was against the standard operating procedure.

When the inspector-general met with Mr Amosun at a meeting chaired by Senate President Ahmed Lawan on Tuesday afternoon, he did not yield to public demand for police’s intervention in the arms scandal.

Pictures circulated by the Senate President’s office showed Messrs Amosun and Adamu sitting only across one another on a midsize conference table — with Mr Lawan sitting on the table’s head in-between the duo.

The meeting discussed the plight of a Nigerian woman, Zainab Aliyu, who had been held in Saudi Arabia on drugs allegations.