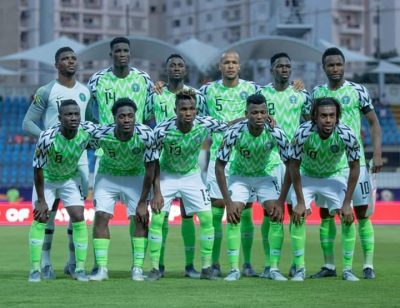 Super Eagles players shunned Tuesday’s press conference ahead of their next Group B clash against the Syli Nationale of Guinea billed for the Alexandria Stadium on Wednesday as they were locked in a meeting to deliberate on the non – payment of their bonuses and allowances, WITHINNIGERIA reports.

Vice-captain of the team, Ahmed Musa was expected to attend Tuesday’s pre-match conference along with the team’s gaffer, Gernot Rohr, but but stayed back at the hotel with the rest of his teammates to discuss the issue.

Completesports.com also gathered that the players who have kept silent on the issue since they started preparations for the 2019 Africa Cup of Nations in Egypt are now ready to take the matter up with the Nigeria Football Federation.

It would be recalled that the Flying Eagles also protested over the non payment of their bonuses refusing to leave their hotel following their elimination at the 2019 FIFA U-20 World Cup in Poland.

The Super Falcons also staged a similar protest after they were knocked out of the ongoing 2019 FIFA Women’s World Cup in France against Germany on Saturday.

Gernot Rohr’s men will take on Guinea on Wednesday at the Alexandria Stadium.