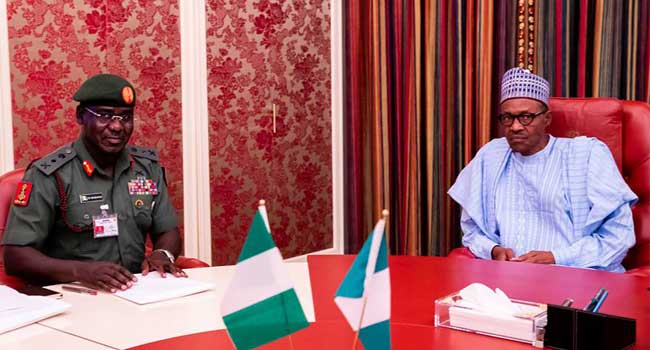 The Action Democratic Party (ADP) has said that the Chief of Army Staff, Lt Gen. Tukur Buratai has indicted himself and the President, Muhammadu Buhari.

The National Chairman, ADP, Yabagi Sani made this known while reacting to a comment by the Chief of Army Staff that allegedly said that; “soldiers fighting the Boko Haram insurgents were not disciplined.”

Sani in his statement said that the Buratai indicted himself by making such a statement which he (Sani) claimed questions the loyalty of the Nigerian Soldiers to the service of Army Chief and the country at large.

Sani alleged that the statement by the Army Chief shows that he no longer enjoys the support and loyalty of his men and has lost complete control of the force which he heads.

The National Chairman therefore in his statement urged the President to relieve the Service chiefs of their duties and appoint new chiefs to boost the morals of the Nigerian soldiers.

According to the statement, the ADP national chairman said; “How can there be discipline and commitment when the soldiers are not properly kitted, allowances not regularly paid and lack of confidence of the President in the established succession plan in the leadership of the service.

“It is inexplicable that the security situation which was described as bad and unacceptable during the previous administration is now at it’s worst ebb under the leadership of a former military General and Head of State.

“The Chief of Army Staff has by this damning statement agreed that he no longer enjoys the support and loyalty of his men and has lost complete control of the force. The President, at this juncture, should as a matter of National urgency, do the needful and appoint new Service Chiefs to boost morale and motivate the rank and file.”