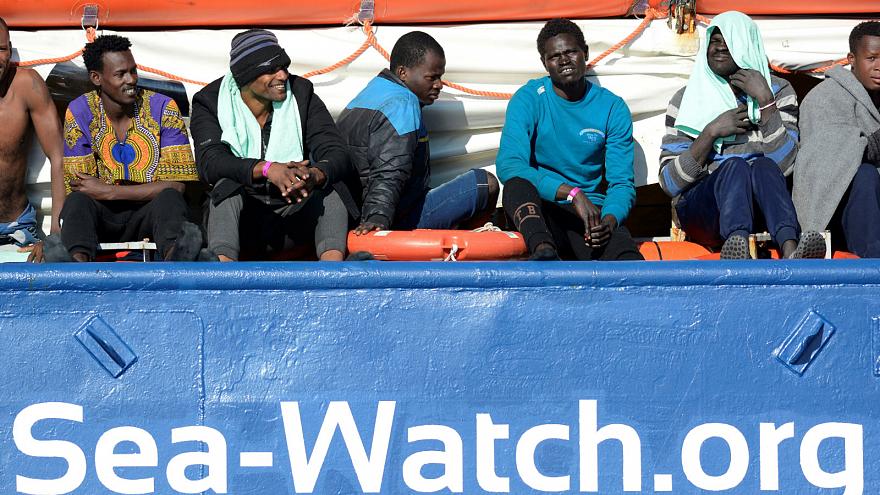 Italian Interior Minister Matteo Salvini allowed 10 of the 53 migrants stranded on the Sea-Watch 3 rescue ship to disembark on Saturday, but pressed ahead with plans to ban such boats from Italian territorial waters.

The 10 rescued migrants, including two pregnant women and three minors according to local media, were brought to the island of Lampedusa on medical grounds.

Sea-Watch International@seawatch_intl
10 of the people rescued by #SeaWatch3 have just been disembarked by Italian authorities on medical grounds. 43 are still on board, including 3 unaccompanied minors, the youngest 12 years old. 43 people with inalienable rights, with the right to a place of safety. We need a port!

The German maritime rescue NGO rescued the 53 migrants off the coast of Libya on Wednesday but has been unable to disembark them after Italy refused them entry with Salvini ordering law enforcement on Thursday to prevent the boat from entering Italian waters.

Salvini also announced on Saturday that he had signed a decree banning “the entry, transit and berthing of Sea-Watch 3 in Italian territorial waters”, which now needs to be approved by parliament.

The government — composed of Salvini’s far-right League Party and the anti-establishment Five Star Movement — adopted another decree earlier this week that would see NGOs fined up to €50,000 if they bring rescued migrants to an Italian port instead of disembarking them in Libya.

The decree was adopted despite the United Nations Refugee Agency (UNHCR) calling on the government to “reconsider” it, arguing that “no vessel or shipmaster should be at risk of a fine for coming to the aid of boats in distress and where loss of life may be imminent” and that “no one should be returned to Libya”. It called on the Italian parliament to “amend it with a focus on refugee protection and saving lives at its core”.

Sea-Watch 3 has refused to bring the migrants it rescued to Libya, saying the north African country — where rival factions have fought for control since the 2011 overthrow of dictator Muammar Gaddafi — “does not qualify as a Place of Safety.”

Sea-Watch International@seawatch_intl
#SEAWATCH WON’T DISEMBARK SURVIVORS IN LIBYA – Tripoli is not a port of safety. It is a crime to forcibly return rescued people to a country at war, where they face unlawful imprisonment and torture. Italy promoting these atrocities and the #EU being complicit is outrageous.

But European leaders from southern EU members — Malta, Cyprus, France, Italy, Greece, Portugal and Spain — who convened to Valletta, Malta for a summit this week, said NGOs “operating in the Mediterranean must respect the applicable international laws and not obstruct operations of the Libyan Coastguard.”

Their joint political declaration also called for more cooperation with third countries — including Libya and Morocco — as well as “solidarity” between EU countries to distribute rescued migrants in order to “break the smugglers’ business model”.

Meanwhile, 60 German mayors have declared their municipalities safe havens and offered to take in the migrants but such matters are decided by the federal government.