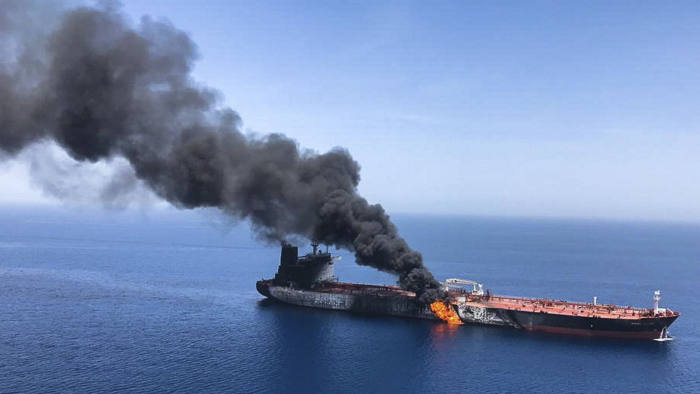 The US government has claimed that Iran is responsible for the attack on two oil tankers near the Gulf of Oman on Thursday.

The Front Altair and Kokuka Courageous went up in flames on Thursday, after they were hit by blasts near the Strait of Hormuz.

The US military has since released a video featuring a group of men on a boat making contact with a larger vessel.

It has claimed the footage shows members of Iran’s Revolutionary Guards removing an unexploded mine from the side of one of the oil tankers targeted in Thursday’s attack.

“Iran did do it and you know they did it because you saw the boat,” U.S. President Donald Trump told Fox News.

Donald J. Trump@realDonaldTrump
“It is the assessment of the U.S. government that Iran is responsible for today’s attacks in the Gulf of Oman….”@StateDept @SecPompe.

It is the second time the US has accused Iran of attacking oil tankers, after four were attacked off the coast of the UAE last month.

Iran has denied all allegations, which have come amid rising tensions between the two countries.

Last month, Iran threatened to block the Strait of Hormuz, a major oil route, if its own exports were stopped, but Trump responded that he was open to negotiations with the country.

However, Iran has repeatedly stated that it will not re-enter talks with the US until it back-pedals on Trump’s decision to withdraw from the 2015 nuclear deal.

The UK backed the US military, with foreign secretary and Conservative leadership candidate Jeremy Hunt saying that Iran are “almost certainly” responsible for the attacks.

Jeremy Hunt@Jeremy_Hunt
I condemn yesterday’s attacks on vessels in the Gulf of Oman. UK’s assessment concludes that responsibility for the attacks almost certainly lies with Iran. These latest attacks build on a pattern of destabilising Iranian behaviour and pose a serious danger to the region

Ongoing strain between the US and Iran has raised concerns of a potential conflict, despite both countries saying that they have no interest in going to war with each other.

On Friday, UN secretary general António Guterres called for an independent investigation into the tanker attacks.