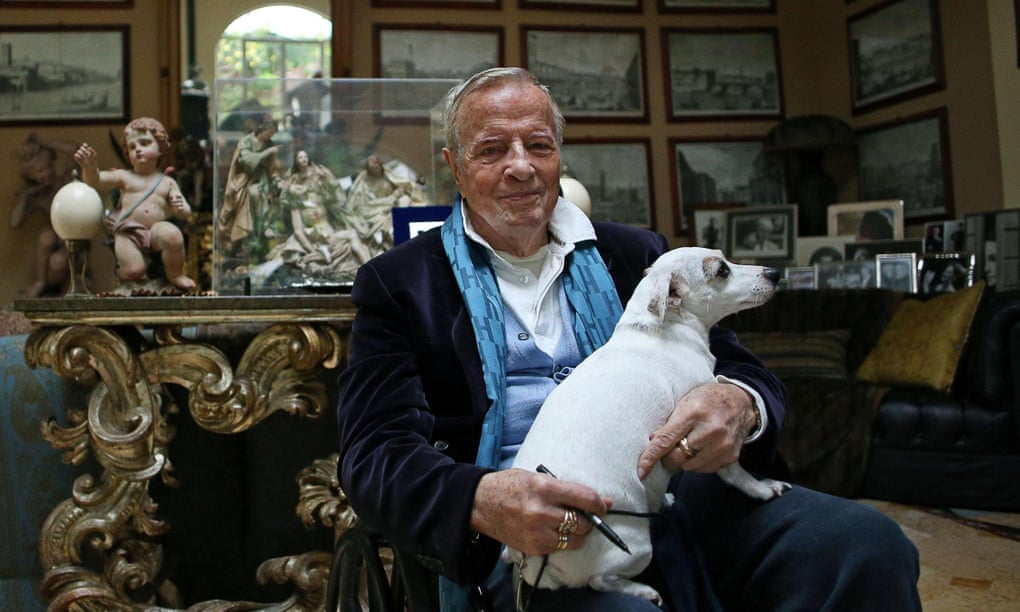 Franco Zeffirelli, one of Italy’s most revered artistic figures, has died at the age of 96.

In a career spanning more than 60 years, Zeffirelli was staggeringly prolific and equally celebrated as a director of films, theatre and opera. Several of his stage productions became successes on screen – most notably a vibrant version of Romeo and Juliet which starred a young Judi Dench at the Old Vic in London and led to an Oscar-winning box-office smash in the late 1960s.

Shakespeare inspired other hit movies for Zeffirelli: The Taming of the Shrew with Elizabeth Taylor and Richard Burton, Hamlet with Mel Gibson and Glenn Close, and a film of Verdi’s Otello with Plácido Domingo. His lavish opera productions brought sensational performances by Joan Sutherland and Maria Callas; 25 years after the latter’s death he directed a biopic, Callas Forever, starring Fanny Ardant. His filmed operas reached large TV audiences and he was celebrated as a great populariser.

Zeffirelli believed he had inherited his passion for music from his grandfather, a conductor. He was born on 12 February 1923 and raised in Florence, the illegitimate son of a fashion designer, Alaide Garosi Cipriani, and wool merchant Ottorino Corsi, both of whom were married to other people. He was named by his mother after a line about zeffiretti (breezes) in a Mozart aria. Cipriani, whose career was damaged by the scandal, died when her son was six and he was taken in by his aunt.

His passion for theatre was sparked as a child during holidays spent in Tuscany where he saw performances by travelling players. “I’ve never believed anything at the theatre as much as the fantasies those storytellers brought us,” he wrote in his autobiography.

He attended a Roman Catholic school in Florence where he said he was sexually assaulted by a priest. When the second world war broke out, he joined the partisan effort, twice escaped death by firing squad and became an interpreter for the Scots Guards. In the postwar years he switched from plans to be an architect and began a career as an actor in radio productions, including a role alongside Anna Magnani in L’Onorevole Angelina. Many years later, he would direct Magnani’s return to the stage in the long-running show La Lupa.

Zeffirelli credited Luchino Visconti with changing his life. Visconti directed him in a small role in a stage adaptation of Crime and Punishment in Rome, then made him assistant director on his 1948 neo-realist classic La Terra Trema, filmed in Sicily using non-professional actors. Zeffirelli then assisted Salvador Dalí on his designs for As You Like It, directed by Visconti. His first task, he recalled, was persuading Dalí to use stuffed goats rather than real ones in the stage production.

In the mid-1950s, Zeffirelli directed Callas for the first time, at her request, in Rossini’s Il Turco in Italia. He went on to direct her in a series of spectacular operas including La Traviata in Dallas in 1958, which broke with tradition by opening with her character dying and then unfolding in flashback. He also directed Bellini’s Norma in Paris in 1964, featuring his own set designs, and Callas’s final operatic role, Tosca at Covent Garden in 1965.

The other soprano Zeffirelli enjoyed a lengthy collaboration with was Sutherland whose career exploded into stardom after he directed her in a blood-soaked version of Lucia di Lammermoor, conducted by Tullio Serafin, at the Royal Opera House in London in 1959.

Later that year, also at the ROH, Zeffirelli staged the short operas Cavalleria Rusticana and Pagliacci, giving them both an authentically realised Sicilian setting. These led to the Old Vic asking him to stage Romeo and Juliet with a similarly realistic Italian setting. Although anxious about directing Shakespeare in English and in England, Zeffirelli launched a youthful production of the tragedy, starring Dench and John Stride. It was dismissed by many critics but championed by the Observer’s Kenneth Tynan, who wrote that Zeffirelli: “approached Shakespeare with fresh eyes, quick wits and no stylistic preconceptions; and what he worked was a miracle … The director has taken the simple and startling course of treating [the characters] as if they were real people in a real situation.”

Zeffirelli’s film version of Romeo and Juliet was also a breath of fresh air. Starring teenagers Leonard Whiting and Olivia Hussey, it was partly shot outdoors, had an unstagy feel and reached a young audience. The film helped make Zeffirelli rich. For many years, he claimed, he had been getting by on freelance director fees and had supplemented his income by selling off a series of Matisse drawings given to him as a gift by Coco Chanel.

In between the theatre and film versions of Romeo, he staged a Sicilian-style Much Ado About Nothing at the Old Vic with Maggie Smith, Robert Stephens and Albert Finney, and shot The Taming of the Shrew with the combustible star power of Taylor and Burton. The couple partly funded the film, which was shot at Dino De Laurentiis’s studios in Rome.

Zeffirelli grew accustomed to stepping from one grandly ambitious project to the next, juggling theatre, TV and opera productions. In 1976, he directed Otello at La Scala with Domingo; the following year his epic TV film Jesus of Nazareth, with Robert Powell as Christ, Ian McShane as Judas Iscariot and Anne Bancroft as Mary Magdalene, was broadcast to a large audience. By 1978 he was preparing a remake of the sentimental drama The Champ, which would star Jon Voight and Faye Dunaway and become a box-office hit.

Further film projects included the 1981 romance Endless Love, starring Brooke Shields and released in an edit that upset Zeffirelli, a 1988 biopic of the conductor Arturo Toscanini and a 1996 adaptation of Jane Eyre with the title role shared by Anna Paquin and Charlotte Gainsbourg. The semi-autobiographical Tea With Mussolini (1999), starring Smith, Dench and Joan Plowright, was co-written by Zeffirelli and John Mortimer. The film followed Luca, a dressmaker’s son in Florence, who, like Zeffirelli, grows up playing with a toy theatre and has encounters with the partisans and Scots Guards during the second world war.

In 1994 Zeffirelli became a member of the Italian senate, representing Silvio Berlusconi’s Forza Italia party for seven years. He was made a Knight of the British Empire in 2004.

… we have a small favour to ask. More people are reading and supporting our independent, investigative reporting than ever before. And unlike many news organisations, we have chosen an approach that allows us to keep our journalism accessible to all, regardless of where they live or what they can afford.

The Guardian is editorially independent, meaning we set our own agenda. Our journalism is free from commercial bias and not influenced by billionaire owners, politicians or shareholders. No one edits our editor. No one steers our opinion. This is important as it enables us to give a voice to those less heard, challenge the powerful and hold them to account. It’s what makes us different to so many others in the media, at a time when factual, honest reporting is critical.

Every contribution we receive from readers like you, big or small, goes directly into funding our journalism. This support enables us to keep working as we do – but we must maintain and build on it for every year to come.