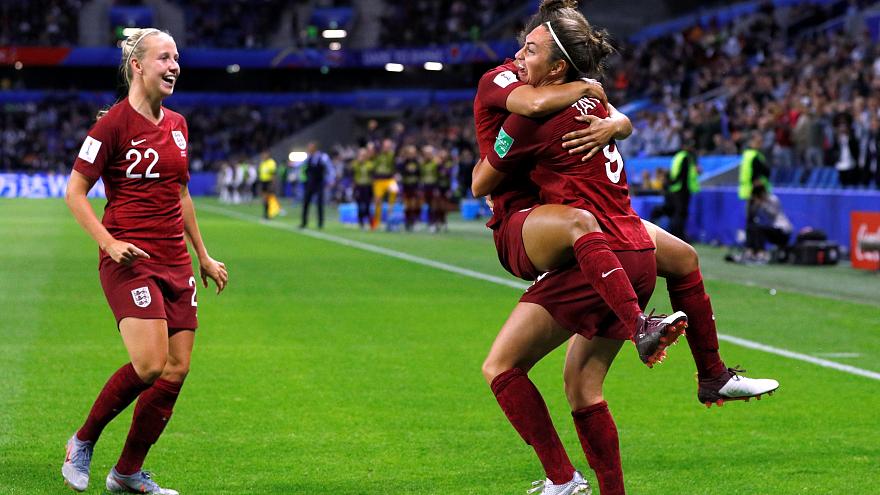 England went through to the knockout stages of the World Cup on Friday night with a 1-0 win over Argentina.

England played a healthy possession game without really penetrating until the 20-minute mark when a sustained bout of pressure from corners paved the way for a foul by Argentine number 8 Linda Bravo in the box. Nikita Parris failed to convert the clear penalty in 28th minute after a long delay due to the referee checking on Argentine encroachment.

England’s possession saw Argentina work hard off the ball, and as the lionesses grew in confidence they began to win balls high up the field, sustaining both the possession and the pressure. However, English impatience threatened the attacking flow.

Goalless at half time, the Argentines could thank their 1 on 1 defensive abilities as they continued to cope admirably with an attack capable of a hatful of goals but who squandered chances as the clinical final touch eluded England.

Aldana Cometti’s mauling of Lucy Bronze on 38 mins showed the coping mechanism was beginning to fail.

Though England were finally the victors, Argentina’s goalkeeper Vanina Correa was the stand out performance, her heroics once again in goal kept her side in the game.

The second half saw Argentina make forays into the England half, but without a great deal of support, and England’s defence will always lap up half-hearted attacks.

The breakthrough came just shy of 61 minutes – a clinical strike from Jodie Taylor on the back of a great break from Jill Scott and a fabulous ball from Beth Mead.

A lamentable set piece from England in the 70th minute gave Argentina the hope of an attack but it came to nothing and England were soon back in the driving seat. The talismanic Scott missed an easy headed chance soon after and left the crowd wondering if the hatful of goals was ever going to come. It wasn’t.

It was not until the 76th minute that Argentina, through the newly introduced Mariana Larroquette, had their first shot on target, which Carly Telford smothered comfortably.

Argentina never tired, and England never really got going. The lionesses will have to recover their touch in front of goal if they are to make a mark on this tournament. They play Japan on Wednesday to decide the group winner.