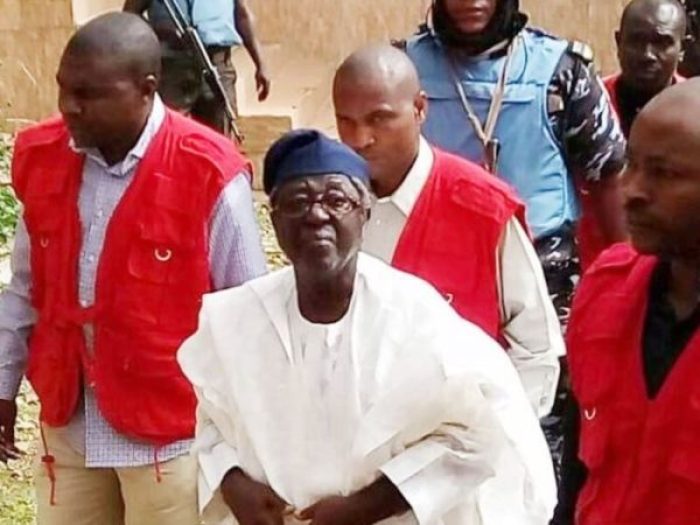 Former Plateau Governor, Jonah Jang on Friday objected to an attempt by a witness, Jonah Kabong, a Civil servant, to tender two classified documents in Court on behalf of the EFCC.

According to a report by the News Agency of Nigeria (NAN), the anti-graft agency had dragged Jang before a Plateau High Court for alleged money laundering while in office as governor between 2007 and 2015.

Justice Daniel Longji, Chief Rotimi Jacobs (SAN), called Kabong as a prosecution witness for the production and submission of some documents.

The documents were said be minutes of state executive council meetings classified as a “Top Secret” documents from the office of Secretary to the Plateau State Government (SSG).

“My Lord, there are two documents that we asked this witness from the office of the SSG to produce for us, which we hope to tender before your lordship.

“We apply to tender it as part of our evidence against the accused,” Jacobs announced.

But Chief Mike Ozekhome (SAN), counsel to Jang, objected to the application.

“My Lord, we are strongly objecting to that application because it’s not proper to tender documents that are classified and bagged a “top secret” before a law court.

“We believe it’s going to be injurious particularly to the Plateau State. Classified documents are not for public consumption.

“Our opposition to this dangerous attempt is not because we are afraid of anything, but such documents by Law are not to be thrown open to the public, ” Ozekhome argued.

Justice Longji after listening to the parties’ arguments adjourned the case to June 27 for ruling on the application.

Earlier, Ozekhome had also punctured the testimonies of an ICPC Investigator, Mr Taiwo Olorunyomi, who early said that Jang had contravened the provisions of ICPC Act and that of the Plateau State House of Assembly by misappropriation of SUBRB N2 billion to another person project.

Olorunyomi had claimed that Jang did not seek for approval from the House before borrowing the said N2bn to execute a different project thereby contravening the law.