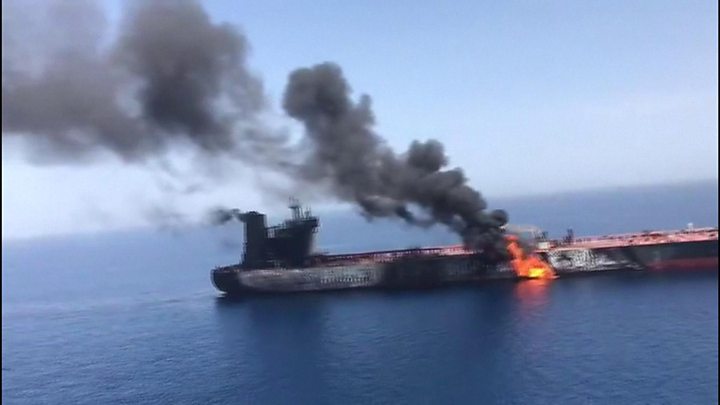 The United States has released a video that it claims shows Iran’s Revolutionary Guard (IRGC) removing an unexploded mine from one of the two tankers hit by explosions in the Gulf of Oman.

Washington believes the images clearly show members of the Iranian elite force approaching the Japanese vessel and removing what the US claims is a limpet mine.

However, on Friday, the Japanese operator of one of the tankers said crew members saw “flying objects” before the explosion.

“The US Central Command released not just the video but also some stills of the timeline of events from the US perspective in the hours after the attacks,” Al Jazeera’s Kristen Saloomey, reporting from Washington, DC, said.

“This video they say was taken some 10 hours after the initial distress calls came in from those two tankers and some five hours after the US naval ship had picked up the 21 sailors who fled that Japanese tanker,” she said.

Iran has vehemently denied involvement with the reported attacks and has described the US’s allegations as “baseless”.

“We are in charge of maintaining security of the Strait and we rescued the crew of those attacked tankers in the shortest possible time … US Secretary of State Pompeo’s accusations towards Iran are alarming,” Foreign Ministry spokesman Abbas Mousavi told Iranian state radio on Friday.

Details of what happened on Thursday are still scarce and at times contradictory. The incident comes amid heightened friction between the US and Iran.

The reported attacks in the Gulf of Oman off the coast of Iran left one ship ablaze and both adrift, forcing scores of crew to abandon the ships. They were the second in a month near the strategic Strait of Hormuz, a major waterway for world oil supplies.

The crews of both ships were evacuated to other nearby vessels. Both Iran and the US later released pictures that appeared to show rescued crew members upon their vessels.

The US Central Command said it had rescued 21 crew members from the Kokuka Courageous Japanese oil tanker, while Iranian search and rescue teams picked up 44 from both ships, Iranian state media reported.

The video release comes hours after Secretary of State Mike Pompeo blamed Iran for the incident, saying “these unprovoked attacks present a clear threat to international peace and security”.

“It is the assessment of the United States that the Islamic Republic of Iran is responsible for the attacks,” he said in Washington.

Pompeo did not provide hard evidence to back up the US stance.

“That the US immediately jumped to make allegations against Iran—w/o a shred of factual or circumstantial evidence—only makes it abundantly clear that the #B_Team is moving to a #PlanB: Sabotage diplomacy—including by @AbeShinzo—and cover up its #EconomicTerrorism against Iran,” Zarif tweeted.

Japanese Prime Minister Shinzo Abe had been visiting Iran in an attempt to ease tensions and was meeting with Supreme Leader Ayatollah Ali Khamenei when the reported attacks occurred.

“Suspicious doesn’t begin to describe what likely transpired this morning,” Zarif said. It is not clear what Zarif suspects Abe’s involvement in the reported attack might have been.

Earlier on Thursday, the incident was discussed at a meeting of the United Nations, which warned the world cannot afford “a major confrontation in the Gulf” as international concern grew over suspected attacks on commercial ships near the Strait of Hormuz.

The US has blamed Iran for previous attacks on oil tankers, saying Iranian-made limpet mines were used to attack four oil tankers on May 12 off the Emirati port of Fujairah. Tehran dismissed the allegation as “ridiculous” and called for dialogue between countries in the Gulf to ease what it called an “alarming security situation” in the region.

Earlier in May, Washington had sent troops and warships to the region to counter unspecified threats from Iran.

The deployment came a year after Washington exited a multinational accord that lifted sanctions on Iran in exchange for curbs on its nuclear programme.

It also reimposed and tightened sanctions on Tehran.

Meanwhile, a spokesman for the Saudi Arabia-led coalition fighting Houthi rebels in Yemen called the suspected attacks a “major escalation” and linked them to attacks in July 2018 on two Saudi oil tankers the Red Sea.

“From my perspective … we can connect it to the Houthi attacks at Bab al-Mandeb,” Colonel Turki al-Maliki told reporters in Riyadh. The Saudi-led coalition accuses Iran of arming the Houthis, but Tehran denies the allegation.

The United Arab Emirates has also condemned the incident on Thursday, calling it a “dangerous escalation”.

In recent weeks, the Houthis have responded to the Saudi-coalition’s intensified raids on its positions by stepping up attacks inside Saudi Arabia, including on its oil infrastructure.

Early on Friday, Saudi Arabia said its air defence forces had intercepted five drones launched by Yemen’s Houthis, who are aligned with Iran, at Abha airport and the city of Khamis Mushait.