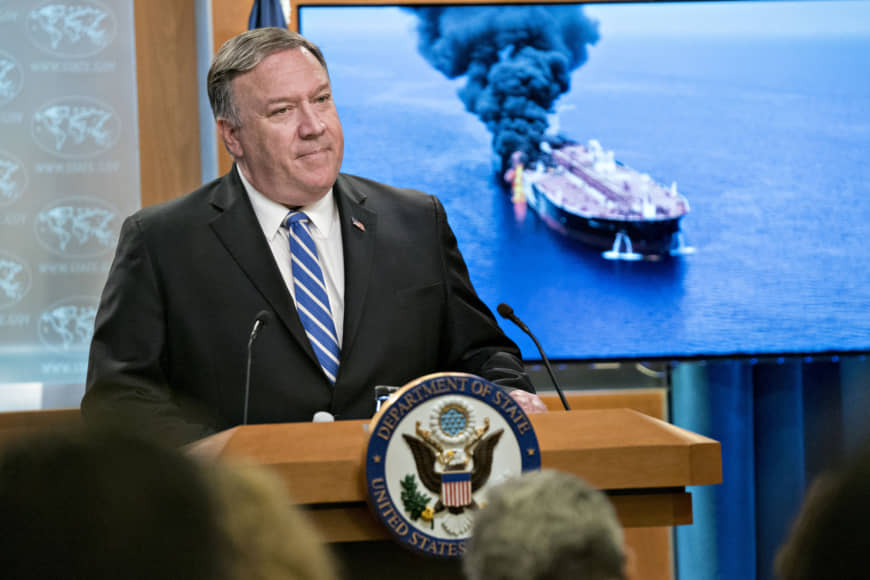 US Secretary of State Mike Pompeo has accused Iran of being behind the reported attacks that damaged two tankers in the Gulf of Oman, offering, however, no concrete evidence in a statement that came hours after Tehran called the incidents “suspicious”.

Speaking at a press briefing on Thursday, Pompeo said the presumed attacks were part of a “campaign” of “escalating tension” by Iran and a threat to international peace and security.

“It is the assessment of the United States that the Islamic Republic of Iran is responsible for the attacks,” he said in Washington, DC.

“This is based on intelligence, the weapons used, the level of expertise needed to execute the operation, recent similar Iranian attacks on shipping, and the fact that no proxy group operating in the area has the resources and proficiency to act with such a high degree of sophistication,” Pompeo added.

He said the US will defend its forces and interests in the region but gave no specifics about any plans and he took no questions.

Speaking earlier in the day, Mohammad Javad Zarif, Iran’s foreign minister, said the timing of the reported attacks was “suspicious” since they coincided with a meeting between the country’s supreme leader and Japan’s Prime Minister Shinzo Abe, who was in Tehran to defuse escalating US-Iran tensions.

Although information of what exactly happened was still scarce, the incidents near the strategically important Strait of Hormuz prompted international alarm and sent oil prices spiralling upwards.

The suspected attacks on Thursday left one ship ablaze and both adrift, forcing scores of crew to abandon the tankers.

Washington accused Tehran of being behind a similar attack on May 12 on four tankers in the same area, a vital shipping route through which much of the world’s oil passes. Iran denies the US claim.

Tensions between Iran and the US, along with its allies including Saudi Arabia, have risen since US President Donald Trump withdrew from an international agreement aimed at restricting Tehran’s nuclear programme last year.

The US has since re-instated economic sanctions that have had a devastating effect on the Iranian economy. In May, it also rushed an aircraft carrier strike group and other military assets to the Gulf region, citing unspecified threats from Iran.

Washington hopes the increased pressure would force Iran to negotiate a new deal, but Tehran says it will not be “bullied” into new talks with the US. Instead, it has called for dialogue with countries in the Gulf to ease the “alarming security situation” in the region.

Responding to Thursday’s events, the UN Secretary-General Antonio Guterres warned the world could not afford a “major confrontation” in the Gulf. Condemning the suspected attacks, he said: “Facts must be established and responsibilities clarified.”

A Saudi-led military coalition, which is battling the Houthi rebels in Yemen, described Thursday’s events as a “major escalation” and linked them to July 2018 attacks on two Saudi oil tankers in the Red Sea.

Riyadh had blamed the attack on the Houthis, which it alleges receives arms from Iran, a charge Tehran denies.

Russia, one of Iran’s main allies, was quick to urge caution on Thursday, saying no one should rush to conclusions about the incident or use it to put pressure on Tehran.

Qatar, meanwhile, called for an international investigation and a de-escalation of tensions. In a statement, the Qatari foreign ministry condemned what it called acts of destruction “regardless of who is behind them”.

Elizabeth Dickinson, senior analyst with the International Crisis Group, said the “current moment in the Gulf is ripe with peril” and was “emblematic of why US-Iran tensions are such a dangerous macro-story for the region”.

“After the latest string of incidents, the geopolitics, regional dynamics, and numerous local conflicts are all on a hair trigger,” she wrote in a post on Twitter. “Both sides of the geopolitical divide have raised the stakes such that miscalculation and accidental escalation are real concerns.”

Thursday’s attacks were the latest sign that geopolitical tensions were mounting, and there was a “significant and increasing risk that events morph into outright conflict,” London-based Capital Economics said in a commentary.

“It might only take an error or miscommunication to spark a broader conflict. And the increased regularity of attacks means that the risk of this is growing,” it warned, adding the dispute could lead to a surge in oil prices.

Crude prices climbed as much as four percent to $62 a barrel after the attacks near the entrance to the Strait of Hormuz, through which one-third of all oil traded by sea, or 20 percent of all oil traded worldwide, passes.

“If conflict further disrupted shipping routes or resulted in damage to oil facilities, oil prices could spike to well over $100 [a barrel]”, Capital Economics said.