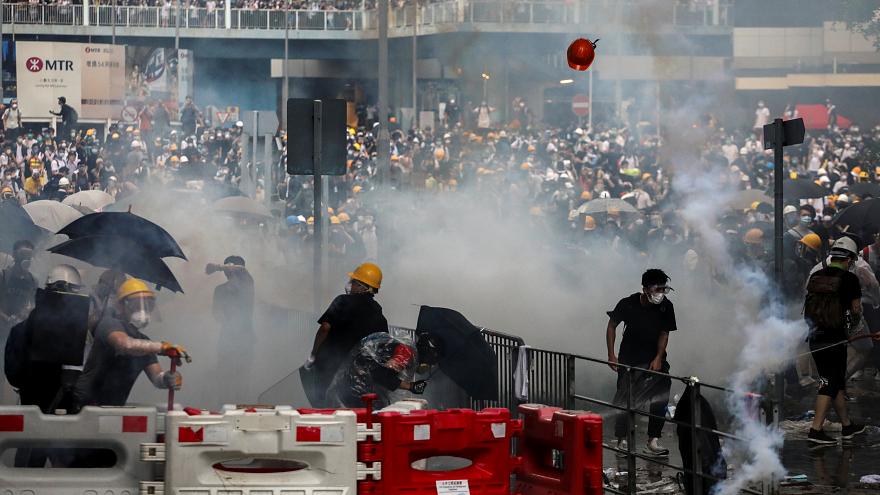 At least 72 people were injured and taken to Hong Kong hospitals in the wake of massive protests Wednesday, with at least two of them in serious condition, according to the Hong Kong Hospital Authority.

The wounded include 50 men and 22 women, it added.

Crowds had largely dispersed around government buildings by Thursday morning — where police and protesters clashed the day before.

The protesters, mostly young people and dressed in black, put up barricades and blocked traffic as they set about trying to occupy the area around the building.

The worst violence the city has seen in decades saw authorities shut some government offices in the city’s financial district.

Hong Kong’s Legislative Council (LegCo) has delayed debate on a controversial extradition bill after tens of thousands of demonstrators surrounded the city’s legislature.

The protest forced the legislature to postpone the second round of debate on the extradition bill, that would allow people to be sent to mainland China for trial. The government said the proceedings in the Legislative Council would be delayed until further notice.

Earlier on Wednesday businesses prepared to go on strike, as demonstrators from across a wide spectrum of Hong Kong society began joining overnight protests.

“We won’t leave till they scrap the law,” said one young man wearing a black mask and gloves. “Carrie Lam has underestimated us. We won’t let her get away with this.”

Lam, Hong Kong’s Chief Executive, has vowed to press ahead with the legislation despite widespread concerns that it could undermine freedoms and investor confidence.

The legislature is controlled by a pro-Beijing majority. Lam has tried to reassure sceptics, saying her administration was adding amendments to the bill – including safeguards for human rights.

The protests have been compared to the pro-democracy “Occupy” protests that shook the city in 2014.

Opposition to the extradition bill on Sunday sparked the biggest political demonstration in Hong Kong since its handover from British to Chinese rule in 1997. The deal guaranteed the city special autonomy.

US President Donald Trump told reporters outside the White House that he was certain China and Hong Kong would be able to work it out.

Trump described the demonstrations as massive. “That was a million people. That was as big a demonstration as I’ve ever seen,” he said.