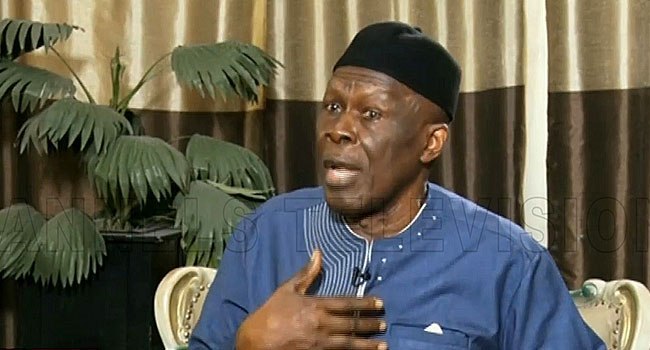 You’ve been keeping ponderously silent since the annulment of the 1993 election. Why are you breaking the silence now?

Thank you. I think by June 12 this year, it will be exactly 15 years since the June 12 1993 presidential election took place. You know its annulment and the dissolution of the National Electoral Commission, NEC, generated a lot of controversy. There were sentiments, prejudices, people protested. There was even loss of lives in some cities in the country. We all are Nigerians and we want this country to be great. I just felt it was so necessary to keep off and allow sentiments to die down and then come out at the appropriate time for all the parts to be known and made public. Besides, when you are given any national assignment, especially a sensitive one like the boss of the election management board, one must be careful, knowing that none who had ever occupied that position had come out without his personality smeared by one controversy or another since 1964. Eyo Esua had a distinguished career before coming to the seat. I thought I could conduct a free and fair election and break away from that jinx. But somehow along the line, even though it came after the election had been conducted, I just felt that I had to keep off and allow other people to manage the body and since I left office, I think there have been Professor Okon Uya, thereafter late Dagogo Jack, who worked under me as national commissioner, and then, Chief Ephraim Akpata, Dr. Abel Guobadia and now Professor Maurice Iwu. Yet, in spite of all these people and what they did, people are still asking: how do we reform our electoral process? And the President himself has set up an electoral reform committee, meaning that something is wrong with the system!

READ  Inec Recruitment: 14,000 Adhoc Staff To Be Engaged In Gombe

And people started talking about the reforms I instituted between 1989 and 1983. People started talking about modified open balloting system, Option A4, meaning it worked and you will also recall that I didn’t score myself; it was the national and international observers that adjudged the elections we conducted as the freest, most credible and peaceful in Nigeria’s political history. And I said it is now time to talk to help reform the electoral process. It is time to revisit those reforms and for Nigerians to know exactly what happened in the past and how it could be revisited. And those things that worked could help us reform the system. And so I thought the time is appropriate for me to break my silence.

Some people felt you were afraid to speak up. They expected you to come up with the facts earlier to help with the revalidation of that election. What’s your reaction?

We felt now that the most important task had been done, what was left was to release the results and that we should challenge the order of the Abuja High Court because we felt it had no business stopping us. We went to the Kaduna Court of Appeal for that order to be vacated.

And perhaps it would have been vacated. NEC’s Director of Legal Services challenged the order on behalf of the commission and the court directed that there should be accelerated hearing on 25 June. Chief Moshood Abiola, presidential candidate of the Social Democratic Party, was there. His lawyer was represented. Alhaji Bashir Tofa of the National Republican Convention NRC, was represented. Unfortunately, even though the hearing was scheduled for 25 June, NEC was dissolved on 23 June. It was not a question that one was afraid. What the Appeal Court would have done was allow NEC to conclude its job because no court had the right to stop us.

It was after the results perhaps were released that there are procedures of tribunals for challenging the results. But the high court intruded. So the commission and I did what we considered appropriate at that point in time.

There was the allegation that part of the pressure you were under was not just from the judiciary, but the fact that you were slapped or that a gun was pointed at you…

Well, you will read in the book. It is just a couple of hours before you know exactly what happened. I wasn’t slapped or beaten, but there was a lot of controversy and we thank God the nation didn’t break into anarchy. It was a very trying period for all of us in the country, especially the principal participants in the drama. Any untoward behaviour would have escalated the conflict and it might have resulted in a total war. So there was a lot of responsibility on those who took part in the drama to hold themselves and behave appropriately to calm down the tensions and feelings, especially when my commission was dissolved and I had no more official capacity to talk.

But now that everything is over, I know that June 12 is a kind of movement and that date, in my view, was the Democracy Day. Because it was at this particular point in time that Nigerians, irrespective of ethnic or religious divide, all came together in a very high spirit of national consciousness. They didn’t mind Moslem-Moslem ticket and all indicated that Nigerians wanted a stable democratic order, a government that would meet their basic necessities. Many people do not really care about the ethnic group of any good leader. They just want a good leader. You could recall when Murtala Muhammed was on the scene, people supported him, especially when he cancelled the controversial 1973 Census that would have favoured people from his own area. He became an instant hero. He was one of the charismatic leaders this nation has produced.

So you’ll find that June 12 as a movement was indeed the day Nigerians opted for a democratic political order. They didn’t care and the parties cut across ethnic, state and regional boundaries. And Nigerians were highly mobilized and they expressed their choices freely without interference. There was no stuffing of ballot boxes and there was no manipulation, intimidation or harassment. Nigerians came out as a body, just like people in the United States and Britain, and voted freely. No intimidation, no one lost his life anywhere, it was God-ordained. And so in my own view, June 12 was the day Nigerians decided freely for a democratic political order without any hindrance. That day should be Democracy Day. I don’t see anything that makes 29 May, 1999 superior to June 12, 1993. Without June 12, there wouldn’t have been May 29. In my view, it was an offshoot of June 12.