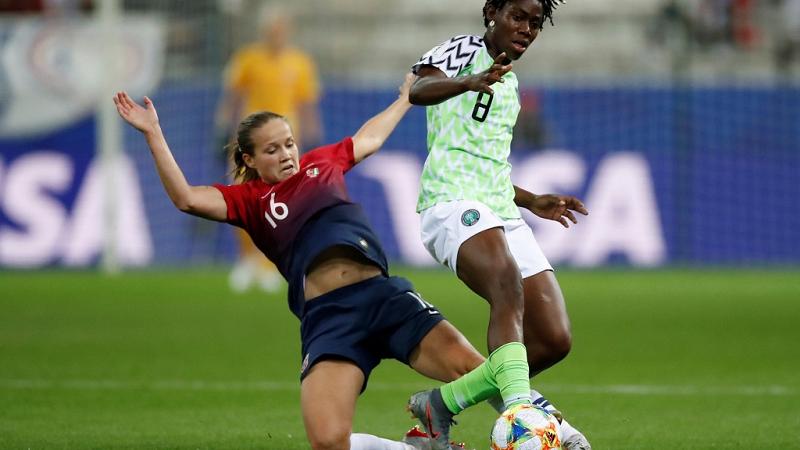 Nigeria’s forward Asisat Oshoala (R) reacts as she scores a goal during the France 2019 Women’s World Cup Group A football match between Nigeria and South Korea, on June 12, 2019, at the Alpes Stadium in Grenoble, central-eastern France. (Photo by Jean-Pierre Clatot / AFP) Nigeria inched towards qualifying for the knockout stages of the Women’s World Cup for the first time in 20 years after beating South Korea 2-0 on Wednesday. A comical 29th-minute own goal from Kim Do-yeon, who somehow hooked a long ball back past onrushing goalkeeper Kim Min-jung, and Asisat Oshoala’s neat finish 15 minutes from the end left the South Koreans pointless after their first two games in Group A and put Nigeria level on three with France and Norway ahead of their crunch clash in Nice later on Wednesday.

Thomas Dennerby’s Nigeria can now legitimately hope for a place in the last 16 regardless of what happens in their last group match against the tournament-hosting French. Four third place finishers from the six groups will qualify, meaning three points could well be enough to see the Super Falcons through to the knockout rounds for the first time since 1999, when they reached the quarter-finals in the US.

South Korea meanwhile face an uphill task to go through now as they face a strong Norway side in their final match, after watching Lee Geum-min’s strike ruled out for a very tight offside just before the hour mark. Later, Group B leaders Spain face off against strongly-fancied Germany in Valenciennes, with the two sides locked on three points and aiming to secure qualification with a game to spare. The Germans are missing star playmaker Dzsenifer Marozsan, who has bee ruled out until least the end of the group stage after breaking her toe during her side’s 1-0 win over China on Saturday.