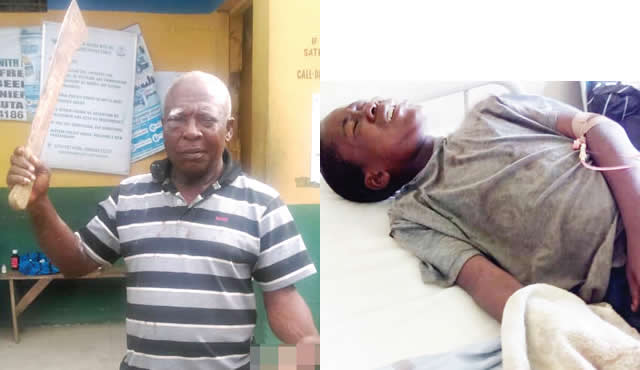 A 61-year-old man, Jeremiah Obifor, on Friday, chopped off the wrist of an 11-year-old boy, Goodluck Amaechi, as the machete narrowly missed the victim’s neck and landed on his right wrist.

The victim and three of his friends went fishing in a canal at the back of Isha Ibrahim Street in the Okokomaiko area of Lagos State around 12.20pm when the incident happened.

Since Thursday and Friday of last week were declared as mid-term break by most schools in Lagos, it was gathered that pupils with adventurous minds engaged in activities that excited them during the period.

An eyewitness, identified simply as Joseph, said he was passing by the canal when the incident happened.

He stated that he had barely walked a few metres away from where the boys were fishing when he heard a cry and he had to run back.

He explained that when he got to the scene, he saw an elderly man leaving the place briskly for his house, adding that the other boys accused him of cutting off Goodluck’s wrist with a machete.

“The sight was horrible. We raised the alarm and took the boy away from there. The man did not feel any remorse; instead, he was saying that he did not know how he missed the victim’s neck,” Joseph stated.

The victim’s father, Damien Amaechi, 42, said he was at work when neighbours called him on the phone and asked him to come to the Okokomaiko Police Station.

Damien stated that because of the urgency and the manner in which the message was passed to him, he had to jump out of a moving vehicle in order to get to the police station.

He said as he was walking towards the police station, a neighbour approached him and told him to take heart, adding that an elderly man had chopped off Goodluck’s right wrist.

The father of four said he lost his wife four years ago and he was responsible for taking care of the children.

He stated, “On Friday, I was in the bus where I was selling drugs. I received a call that I should come back immediately. I asked the person who called me about what happened but he could not tell me. Neighbours continued calling my mobile phone asking me to come to the Okokomaiko Police Station.

“Nobody gave me an inkling of what the situation was. But because of the urgency and the intensity in which the message was delivered to me, I had to jump out of a moving bus without looking back. As I was walking towards the bus stop, people were looking at me, while others started following me.

He said the police had arrested Obifor and that investigation was ongoing and the suspect would soon be charged to court.

Elkana stated, “On June 7, 2019, around 12.20pm, one Doris Isaac of No. 6 Ajanaku Street, Okokomaiko, reported at the Okokomaiko Police Station that on the same date around 8.20am, her 11-year-old foster son, Goodluck Amaechi, of the same address was attacked with a machete by one Jeremiah Obifor, 61, of No.14 Isha Ibrahim Street, Mechanic bus stop, Mebamu, Okokomaiko, and cut off the boy’s right wrist.

“The victim was rushed to the Igando General Hospital. The suspect alleged that he saw the victim around his fish pond and thought that he came to steal his fish and he attacked him. Investigation is ongoing and the suspect will be charged to court after the conclusion of investigation.”