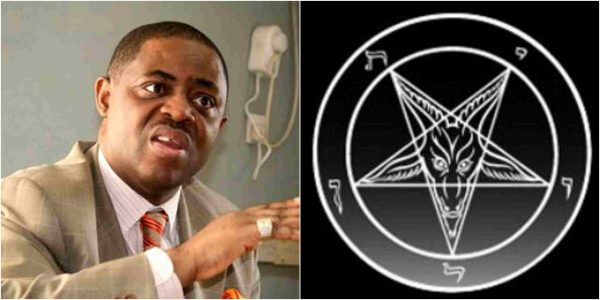 The Church of Satan and former Aviation Minister, Femi Fani-Kayode are the subjects of discussions currently on twitter as the two entities just clashed on the social media platform.

Fani Kayode through his twitter handle referred to former New York Police Department cop, Linda Fairstein, as a witch and member of the Church of Satan.

The church however would not have any of that and responded to FFK’s accusation and at the same time denying Linda as a member of the sect. Femi had tweeted about the movie When They See Us, which is about some young 5 black boys that were wrongly convicted over a crime they never committed. While blasting the cop that handled the case Linda Fairstein, he wrote that she was not only a racist, but also a member of the Church of Satan.

He said;
“I watched @netflix‘s powerful,celebrated and acclaimed film titled @WhenTheySeeUs which is based on a true story. It was brilliant and captivating.I have no doubt that it will win awards,including an Oscar. It was an emotional roller-coaster: frightening,moving and troubling.

I was shocked about the injustice that the American justice system meted out to the five innocent, young black boys that were falsely accused of the most brutal and vicious gang rape, framed up and jailed by those that manipulated the system and abused their power in 1989

The whole thing was simply harrowing and heartbreaking and the series took us through the whole ordeal as if we were actually there with the victims and sharing in their trauma and pain.What those boys were subjected to,including: a)false confessions that were procured by.

fake promises, lies, violence and coercion, b)insane,racist and obsessive criminal investigating officers, c)a heartless and callous media who more often than not act and report matters in a partial way,believe the worst about the accused,subject them to media trials and.

convict them on the pages of their newspapers and television screens,d) biased and dishonest judges who work and run their courts at the behest and under the direction of the security agencies,the investigating agencies, the executive and the state, are the sort of things that happen in Nigera and indeed much of Africa every day and yet most people refuse to speak out against it or simply do not give a damn.

Every evil, crooked, wicked, corrupt, malicious, prejudiced, obsessive, politically or racially-motivated and sadistic investigating officer and prosecutor and every compromised,corrupt and bent judge ought to watch this film and reflect deeply on the immense evil and immeasurable damage that they do to innocent people and their poor families when theyframe them up and send them to jail for no just cause.

There is no greater evil than this. God’s wrath always falls upon such people. It is only a matter of time.Yet ultimately this powerful and compelling story confirms the awesome and miracle-working power of God and all that can be wholesome and beautiful about the American Justice system when good people jump into the fray and administer it.

I say this because many years later the truth about who was responsible for the brutal rape and assault came out, those that were responsible for the abuse of power, the evil frame-up and the malicious administration of injustice were exposed,the real perpertrators of the heinous crime were found and the 5 young black boys from Harlem that had been wrongly convicted were freed, returned home as heroes and paid a massive $41 million USD as compensation by New York City for wrongfully prosecuting them and keeping them in jail for 10 to 14 yrs in the most horrendous conditions.

May God protect us all from the evil devices of satan and the wickedness of cruel, ambitious and ruthless men and women who delight in destroyong the lives of the righteous and the innocent. Kudos to the actors in this splendid series and kudos to @Oprah for producing it.

I’ve never been as shaken by any film as I was by this one.I am glad that the heads of some of those that orchestrated this bestial crime against the lives of 5 innocent black boys have started rolling as a consequence of its release.#theyseeus #CentralParkFive #CentralPark5”