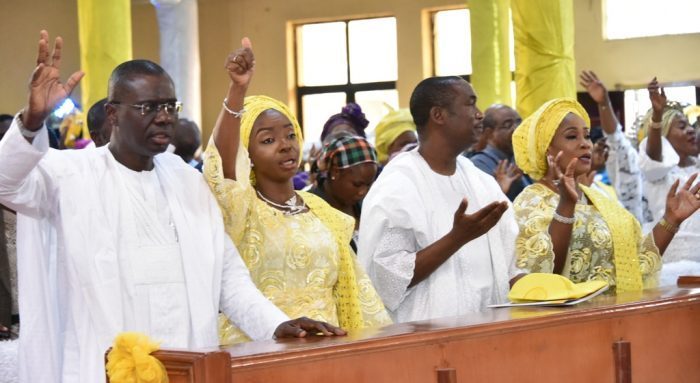 Lagos State Governor, Mr. Babajide Sanwo-Olu has restated the commitment of his administration to serve the people and be fair to all, irrespective of their religion, tribe or party affiliation.

Speaking at a Special Inauguration Thanksgiving Service held at the Chapel of Christ the Light, Alausa, the Governor stated that since the people of the state have spoken through their votes, himself and his deputy have no choice but to serve them without fear or favour and make life worth living for every resident.

He expressed appreciation to the people for their prayers and for coming out en-masse to rejoice with them at the event, saying: “we are humbled this morning because we are not the best but God has chosen us. We want to assure you that we would not serve only the party but all the residents of the state. We said it at the inauguration, our government will be for all. We will serve and be a blessing to you,’’ he said.

He urged the religious leaders to remember them in their prayers always to ensure the success of the administration.

“I would also implore our clerics to always remember us in prayer as we go along the journey while I restate that our government will be government of all,” he said,

The Governor reiterated that religious leaders play crucial role in information dissemination, following the strong belief that the followers have in them and therefore urged them to assist his administration by using their various platforms to pass information on government programmes and policies.

“As I said earlier, I would not but seek your support on propagation of our programmes and policies, especially on traffic and waste management and zero tolerance for wastes all over the state.

“We know that if we do well in traffic management and waste management, our state will be better health wise,” Sanwo-Olu said.

The Governor announced that work would commence immediately on the repair of bad roads across the state as contained in the newly signed Executive Order on Waste Management, Traffic Matters and Sanitation.

Earlier in his sermon titled: “Righteousness in Governance”, Bishop of Lagos West Diocese of the Anglican Communion, Right Reverend James Olusola Odedeji urged the Governor and his cabinet to ensure absolute loyalty and obedience to God noting that there can never be righteousness in governance when God is not enthroned.

He urged the Governor to be firm in decision making, fair in governance and friendly, reminding him that he is not only responsible to the people, but accountable to God.

“You are responsible to the people and accountable to God but bear in mind that your election is for a purpose. Nobody reigns forever. Surround yourself with Godly and responsible people,” he said.

The Bishop, however, appealed to the people of the State, especially party leaders, family members and friends not to put unnecessary demand and pressure on the Governor and his cabinet, but rather support them through good advice and prayers.

Prayers were offered during the Service for the success of the administration, peace in Lagos in particular and Nigeria in general.

Also in attendance at the Thanksgiving Service organized by the Ministry of Special Duties, were the Deputy Governor, Dr. Obafemi Hamzat, wives of the Governor and the Deputy, newly appointed Secretary to the State Government, Mrs. Folasade Jaji and her husband, the Chief of Staff, Mr. Ayinde, the Head of Service, Mr. Hakeem Muri-Okunola, top party leaders and government officials.