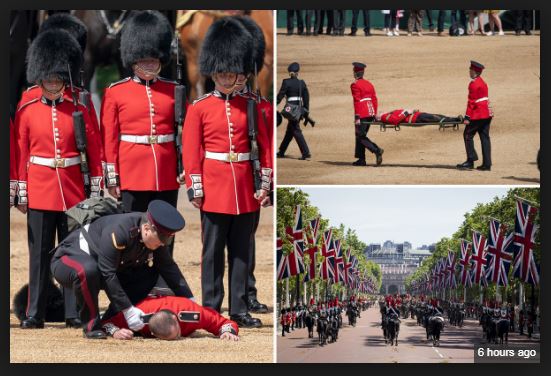 Two guardsmen fainted today amid very hot temperatures during Trooping the Colour rehearsals ahead of the Queen’s birthday celebrations next week.

The soldiers had to be helped to their feet after collapsing to the ground as the mercury soared to 27C making it the hottest day of the year.

Three colleagues rushed to help the troops, who were in full ceremonial kit including their 2lb bearskin hat. Today’s rehearsals come just a week before Trooping the Colour is held on June 8th to mark the Queen’s official birthday.

Today’s rehearsal is the second for the Trooping the Colour, with the Duke of York inspecting the troops. Next week will see the Queen and members of the Royal Family taken down Pall Mall before watching a FAR fly-past on the balcony of Buckingham Palace.

More than 1,400 officers and men are involved with 200 horses and 400 musicians. The procession has taken place every year the current Queen has reigned apart from 1955 when it was cancelled.