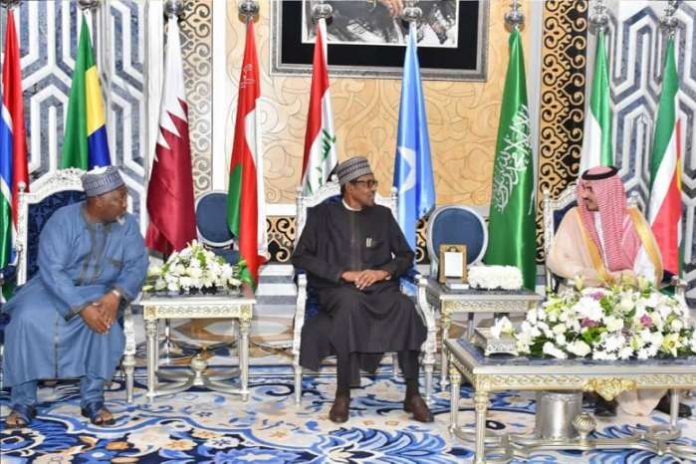 President Muhammadu Buhari has passed a vote of confidence on the intervention programmes of the various institutions under the Organisation of Islamic Cooperation (OIC) for the impact they are making on Nigeria and other African countries.

President Buhari, gave the commendation while reading the collective statement of African countries at the 14th Summit of the OIC in Makkah, Saudi Arabia.

According to a statement by the Senior Special Assistant on Media and publicity, Garba Shehu, the President commended the robust interventions of the Islamic Development Bank, IDB, in key sectors such as agriculture, trade and investment.

In the statement read in the early hours of Saturday, President Buhari said: “The robust interventions of the various OIC Institutions and principally the Islamic Development Bank Group, have been effective in such key sectors as trade and investment, agriculture, rural development and food security, science, technology and innovation, poverty alleviation as well as women and youth empowerment.’’

In the specific case of Nigeria, the President acknowledged the support of OIC Member States in countering the menace of terrorism and armed criminality in West Africa, the Lake Chad area and the Sahel Countries.

“In particular, Nigeria acknowledges the support of OIC Member States in countering the menace of terrorism and armed criminality in West Africa, the Lake Chad area and the Sahel Countries. We appreciate their contributions in the alleviation of the humanitarian crisis arising from the insurgency but urge them to do more.

“We appreciate their contributions in the alleviation of the humanitarian crisis arising from the insurgency but urge them to do more,” said the President.

READ  COVID-19: Ogun Govt To Distribute “Not For Sale” Hand Sanitizers To Residents

He highlighted the Inter-Water Basic transfer, aimed at recharging the Lake Chad, the National Food Security Programme, the Second Niger Bridge, various roads and school rehabilitation projects as some projects in Nigeria that have attracted the support of OIC institutions.

On issues of concurrent global significance, President Buhari said the African members of the OIC were pleased with renewed efforts by the organization for the restoration of the national rights of the Palestinians and other long-standing unresolved conflicts.

The President, however, noted that many OIC member states were grappling with serious security problems, including terrorism, violent extremism and armed criminality.

The Nigerian leader said some of these challenges have assumed grave dimensions in recent times and required serious and coordinated approach for lasting solutions.

‘‘In addition to the core issue of the restoration of the national rights of the Palestinians and other long-standing unresolved conflicts, we now grapple with serious security problems, represented by the destructive activities of terrorists, violent extremists and armed criminals in many of OIC Member States.

‘‘This situation has also been compounded by a series of political crises, which continue to affect a number of our countries.

‘‘We commend OIC engagement with other international actors in addressing the various political conflicts in the OIC region and the plight of the Rohingya Muslim minority in Myanmar,’’ he said.

President Buhari also used the occasion to express confidence that the on-going political transition in Sudan and Algeria would be concluded smoothly and peacefully.

He thanked King Salman Bin Abdul Aziz Al-Saud for hosting and chairing the 14th OIC Summit and the Turkish President, Recep Erdogan, whose tenure just ended for “his commitment to the ideals of our Organization and his efforts in ensuring that the OIC achieves its set goals and objectives, throughout his tenure as Chairman.”