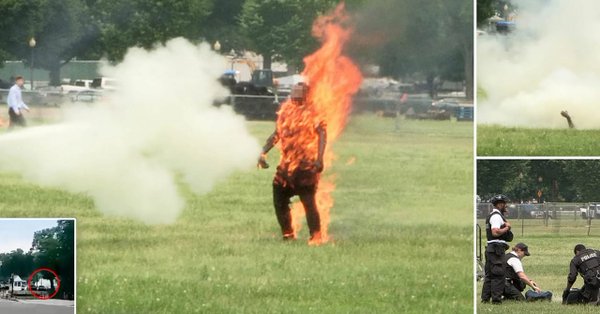 A yet to be identified man is currently receiving first aid treatment after setting himself ablaze at the Presidential Villa (White House) in Washington DC, United States.

The ugly incident occurred on Wednesday, May 29 at the south of the president’s residence — near 15th Street and Constitution Avenue, the Secret Service said on Twitter.

“Secret Service personnel are on scene assisting @NatlParkService and @usparkpolicepio in rendering first aid,” it said, referring to park rangers and park police.

Similarly, a spokesman to White House said: “I can confirm that we’ve transported one patient with burns from the Ellipse and we’re now on the scene assisting law enforcement”.

Giving more account of the incident, an eyewitness who was visiting the National Mall with two of her cousins from Bolivia said: “we saw this man” on the Ellipse and “he starts running, and then we saw him covered in flames.”

“He started to walk” and then “cops started coming to the area and he collapsed. The fire then was extinguished”, she said.

It was learned that over 70 officers swarmed the area to ensure there was no other casualty, with tourists and visitors around the vicinity observing the scene.