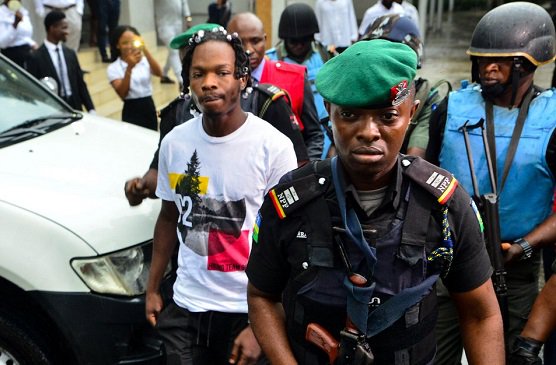 The Federal High Court in Lagos on Thursday granted a musician, Azeez Fashola (a.k.a Naira Marley), bail for N2millon with two sureties in like sum.

Justice Nicholas Oweibo ruled that one of the sureties must be on Grade Level 10 in the Federal or state employment.

The other surety must have a landed property within the court’s jurisdiction.

The judge directed the Economic and Financial Crimes Commission (EFCC) to verify the bail terms.

He was charged with 11 counts of violating the Cyber Crimes Act of 2015.

The defendant pleaded not guilty.

The musician risks seven years in jail if found guilty.

The charge reads in part: “That you, Azeez Adeshina Fashola, aka Naira Marley, and Raze (still at large), on or about the 11th day of December 2018, within the jurisdiction of this honourable court, conspired amongst yourselves to use Access card 42658840359191132 issued to persons other than you in a bid to obtain gain and you thereby committed an offence contrary to Section 27(1)(b) of the Cyber Crimes (Prohibition, Prevention etc) Act 2015 and punishable under Section 33(2) of the Same Act.

“That you, Azeez Adeshina Fashola, aka Naira Marley, and Raze (still at large), on or about the 10th day of May 2019, within the jurisdiction of this honourable court, with intent to defraud possessed counterfeit card 4921819410257431issued to Timea FedorneTatar and you thereby committed an offence contrary to and punishable under Section 33(9) of Cyber Crimes (Prohibition, Prevention etc) Act 2015.”

The prosecution said some of the credit cards bore the names Nicole Louise Malyon and Timea Fedorne Tatar.

The singer was arrested on May 10 following intelligence report which EFCC said it received about his involvement in internet fraud.