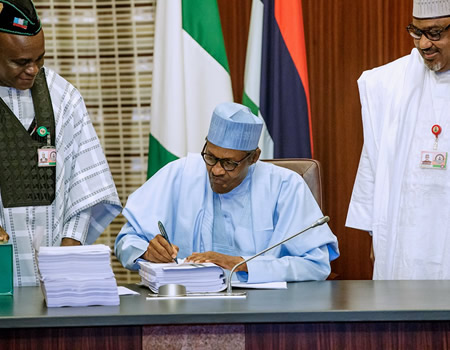 President Muhammadu Buhari is to present a supplementary budget to the 9th National Assembly to correct his grievances over the N9.12 trillion 2019 budget as soon as it settles down and appoints its principal officers.

Minister of Budget and National Planning, Senator Udoma Udo Udoma made this disclosure on Tuesday while giving a breakdown of 2019 budget signed into law on Monday by Buhari.

Buhari had on Monday complained as usual that National Assembly did not return the budget to him the way he presented it to NASS in December 2018.

But Udoma, who was unable to cite specific examples of the distortions said N1 billion was deducted from the provision for the second runway of Nnamdi Azikiwe International Airport.

According to him, NASS increased Buhari’s proposal of N8.83 trillion by N90.33 billion to N8.92 trillion thus hiking the inherent overall deficit by N58.83 billion.

“Executive revenue assumptions were generally approved and adopted by NASS, except for unexplained increases totalling N31.5 billion on some non-oil revenue lines.

“To fully fund the budget, the level of borrowing may, therefore, have to increase,” he explained.

The breakdown also showed that Federal Ministry of Power, Works and Housing has the highest capital allocation of N394.1 billion, followed by Ministry of Transportation with N179.38 billion, the Ministry of Defence with N159.13 billion and Ministry of Agriculture and Rural Development with N107.22 billion.

And even though Government actually released less than N500 billion to fund its social investment programmes between 2016 and 2018, the standard figure of N500 billion was still approved for 2019 to fund Social Housing, Home Grown School Feeding Programme, Government Economic Empowerment Programme, N-Power Job Creation Programme, Conditional Cash Transfers and others.

Udoma stated that Buhari “has directed that immediate action be commenced to restructure the Joint Venture Oil Assets so as to reduce government shareholding to not less than 40 per cent and that this exercise must be completed within the 2019 fiscal year.”

The President also ordered that all assets seized from corrupt public officials without legal encumbrances should be immediately sold off to fund the budget.

Also on the occasion, Minister of Finance, Mrs Zainab Ahmed corrected the N2.079 figure that she earlier gave as total capital expenditure, giving a revised amount of N1.573.

Earlier in a review of 2018 budget, Udoma revealed that as at the end of the year, Federal Government’s actual aggregate revenue was N3.96 trillion, which is 55 per cent of the budget, although higher than 2017 revenue.

“The overall revenue performance is only 55 per cent of the target in the 2018 Budget partly because some one-off items such as the N710 billion from Oil Joint Venture Asset restructuring and N320 billion from revision of the Oil Production Sharing Contract legislation/terms are yet to be actualized and have thus been rolled over to 2019.

“Of the total appropriation of N9.12 trillion, N6.938 trillion was spent. This represents a 79% performance.”

Other highlights of the budget include:

▪ Recurrent (non-debt) spending N17.38 billion more than the Executive proposal.
▪ Out of the Capital Expenditure of N2.93 trillion, MDAs capital and Capital supplementation is N2.09 trillion.
▪ Capital Expenditure (Inclusive of Transfers, GOEs Capital & Project-tied loans) as the percentage of FGN Expenditure is 31%.
▪ At N2.14 trillion, debt service is 27% of revenue.
▪ The proposal for the provision to retire maturing bond to local contractors was reduced by N10 billion.
▪ The overall budget deficit is N1.918 trillion, against N1.859 trillion in the Executive Proposal. This represents 1.37% of GDP.
▪ The budget deficit is to be financed mainly by borrowing N1.605 trillion split equally between domestic and foreign borrowing. This is a reduction from the Executive planned borrowing of N1.649 trillion.
▪ Financing gap of N102.84 billion.